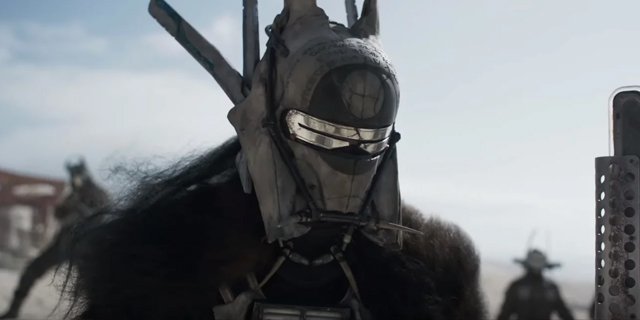 One of the things that excited me about Solo: A Star Wars Story was the immense secrecy around the villain of the movie. I thought, unlike previous Star Wars film trailers, there had been no shots of the antagonist of the film and yet the main villain of the movie was actually in my face the whole time.

I’ve seen the teaser probably over eighteen times now and for some reason it didn’t click in my mind that the character with the super cool mask was probably the major antagonist of the movie. *rolling my eyes* Duh. And now, thanks to the leaking of some toys for the movies (it’s always the toys) it seems the name for this mysterious villain has been revealed. His name, supposedly, is Enfys Nest.

Now that is undoubtedly a Star Wars name unlike any other I’ve heard before. His last name is Nest? That’s…interesting. It definitely highlights the different tone of this movie and I like it. Now of course this could be just a bunch of bologna and he isn’t the main villain of the movie nor is that his real name but if it is correct that definitely helps nurture my excitement for this movie.

Enfys Nest, hmm, it has a nice ring to it the more you say it and it definitely matches the strangely masked character. I can’t wait to discover if it’s true or not.

I thank you for reading and I hope you have a magical day. May the Force Be With You.

Okay, we all know that an Avengers: Infinity War trailer is just around the corner and to get us ready for the trailer premiere there have been some rather exciting developments for the movie.

First, off there’s a new promotional poster featuring Thanos and his villainous crew. Here it is. 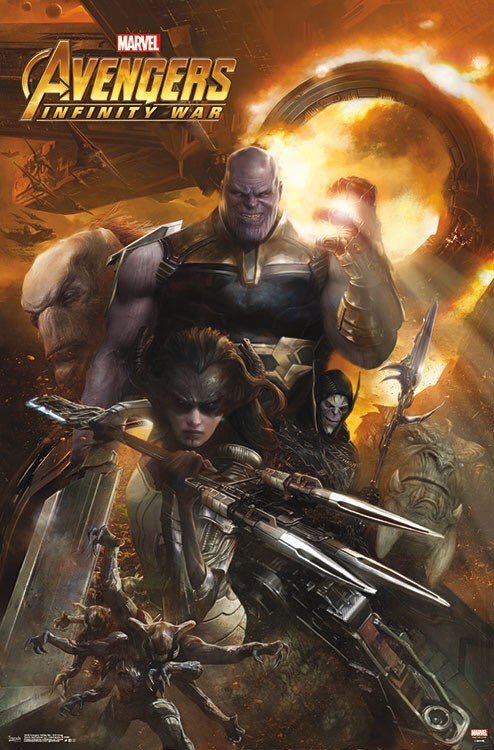 Okay, this is already exciting enough as it is but listen to this. Here are Thanos’s four henchmen and the actors that are playing their voices.

Corvus Glaive (the creepy guy in black) is the general of Thanos’s armies and wields a pike that makes him immortal! The pike can also penetrate any surface or object. (Captain America and Black Panther, don’t get too cocky with your impenetrable vibranium.) And guess who’s voicing this character? None other than…Mark Hamil!!!! Yes, it’s true. Mark Hamill is voicing one of the villains in Avengers: Infinity War. Can this movie get any better?

The second character is Proxima Midnight (the only female on the poster)  who is the wife of General Glaive and carries a spear forged from a star by Thanos himself. (These villains sound like the real deal. Uh-oh.) And she’s being voiced by Whoopi Goldberg. Can you believe that? This movie is going to be off. The. CHAIN!!!

The third character is Ebony Maw (this is the alien by Thanos’s left arm) who is a mind manipulator. I guess he’s basically Scarlet Witch on steroids in the persuasive department. He’s voiced by Bill Nighy (I, unfortunately don’t know who that is.)

And the final henchman is named Cull Obsidian (he’s the horn faced alien in the right corner) who is basically the Hulk of Thanos’s army. He’s big, he’s brutish, and I’m pretty sure he kicks serious butt. He will be voiced by Vin Diesel.

I have to say, after hearing the descriptions of these villains, including Thanos, I am legitimately worried now. These Marvel superheroes have faced difficult antagonists before but they have never come across the likes of these powerful beings. I mean, these villains sound just as powerful, maybe even more powerful than some of the Avengers and that’s worrying me greatly. I knew there were going to be casualties in this movie but I think it’s going to be worse than I imagined. Or maybe not. I don’t have long to find out though. *thumbs up*

This is a game changer and the perfect move for Disney. Ever since Solo: A Star Wars Story was announced to come out in May of this year I knew it was going to be a problem box-office wise. Having two mega-blockbuster franchises like Marvel and Star Wars have movies coming out in the same month just doesn’t sound right and I think Disney knew that.

They also probably moved the date back to avoid spoilers from the movie leaking online. You see, it was going to originally open internationally in India on April 27 but that would’ve meant there would have been a whole week for spoilers to spring from the international premiere onto the internet. And I’m sure the spoilers would have been ridiculously awesome so Disney just decided to have us over here in the United States and Canada see it at the same time so we Marvel fans can enjoy the movie all the same time. Thank you Disney.

Well, this is the latest news for Avengers: Infinity War and it has absolutely made my day. I thank you for reading and I hope you have a Marvel-ous day.