The Force Awakens was the Star Wars movie I had been waiting for since I was a child. I enjoyed the prequel trilogy (mainly because they were the first Star Wars movies I’ve ever seen) and the original trilogy was of course a major Star Wars treat but I wanted more. I wanted characters I could really get behind and cheer for, stories that I could truly enjoy and remember because I was old enough to experience a new Star Wars movie in all of its glory. The Force Awakens was that movie. I went and watched it five times at the movies because it was that special to me and I’ve seen it, I’d say, over a hundred times since. So I can’t express to you how excited I am to share with you my five favorite scenes from this movie. Enjoy!

This is one of the most exciting scenes in The Force Awakens for a couple of reasons. One, it’s the first time I got to see Rey pilot a ship and she flew the Millenium Falcon so well it was like she was born to fly. So that was exciting. Two, it’s just a fascinating action scene. The TIE fighters chasing the Millenium Falcon through the Jakku ship graveyard is one of the most awesome scenes in Star Wars and the way it ends with Rey flipping the ship, Finn shooting the oncoming TIE fighter, and them shooting off into space is one of the more perfect endings to an action scene in Star Wars.

For two years straight I was trying to figure out what this scene was trying to say with all of its hidden references and cryptic meanings. After The Last Jedi this vision has become obsolete in the realm of theorizing but it’s still one of my favorite scenes from The Force Awakens.

END_OF_DOCUMENT_TOKEN_TO_BE_REPLACED

Ever since I’ve watched The Force Awakens I have been constantly struck by the incredible similarities between Anakin Skywalker and his grandson, Ben Solo. There have been so many parallels between the two characters and here are some of the most striking examples.

So here’s Anakin with his scar, that long hair and dark brown robes.

And then you have Kylo Ren who looks nearly identical in everything but his face. His hair is long and curled like his grandfather’s, he bears a scar eerily similar to that of Anakin’s, and he wears dark robes like he did.

2. They Both Despise Masters

Anakin didn’t entirely trust the tutelage of his master, Obi-Wan Kenobi, or that of the Jedi Council and that led him to eventually joining Emperor Palpatine as the Sith Lord promised him power and everything that he desired.

And Kylo Ren didn’t fully trust Luke Skywalker either, that’s why when he saw his uncle over him with a drawn lightsaber he was so quick to turn against him and join Snoke. He even turned against his master Snoke. Both of them had issues with masters and both of them joined the dark side.

END_OF_DOCUMENT_TOKEN_TO_BE_REPLACED

The Force Awakens is one of my favorite Star Wars movies because it introduced some truly fantastic characters; Adam Driver’s Kylo Ren, Daisy Ridley’s Rey, Oscar Isaac’s Poe Dameron, and John Boyega’s Finn. Finn was such a lovable character. He was adorable, sweet, kind, heroic, and he was different than other major Star Wars characters that came before him considering that he was the first stormtrooper who went good. In The Last Jedi he was even more heroic and that makes me even more excited for his involvement in Episode IX. So today on this segment of Greatest Moments I’m sharing with you all of my favorite moments from Finn. Enjoy!

FN-2187 could’ve easily been like every other First Order stormtrooper, a mindless human robot who follows any order, atrocious or not, but he decided to be different, he decided to do what is right, and as he was given the order to slaughter all of those helpless Jakku civilains he didn’t. He lowered his gun despite knowing that he could’ve easily gotten shot right there on the spot and that takes a lot of bravery. 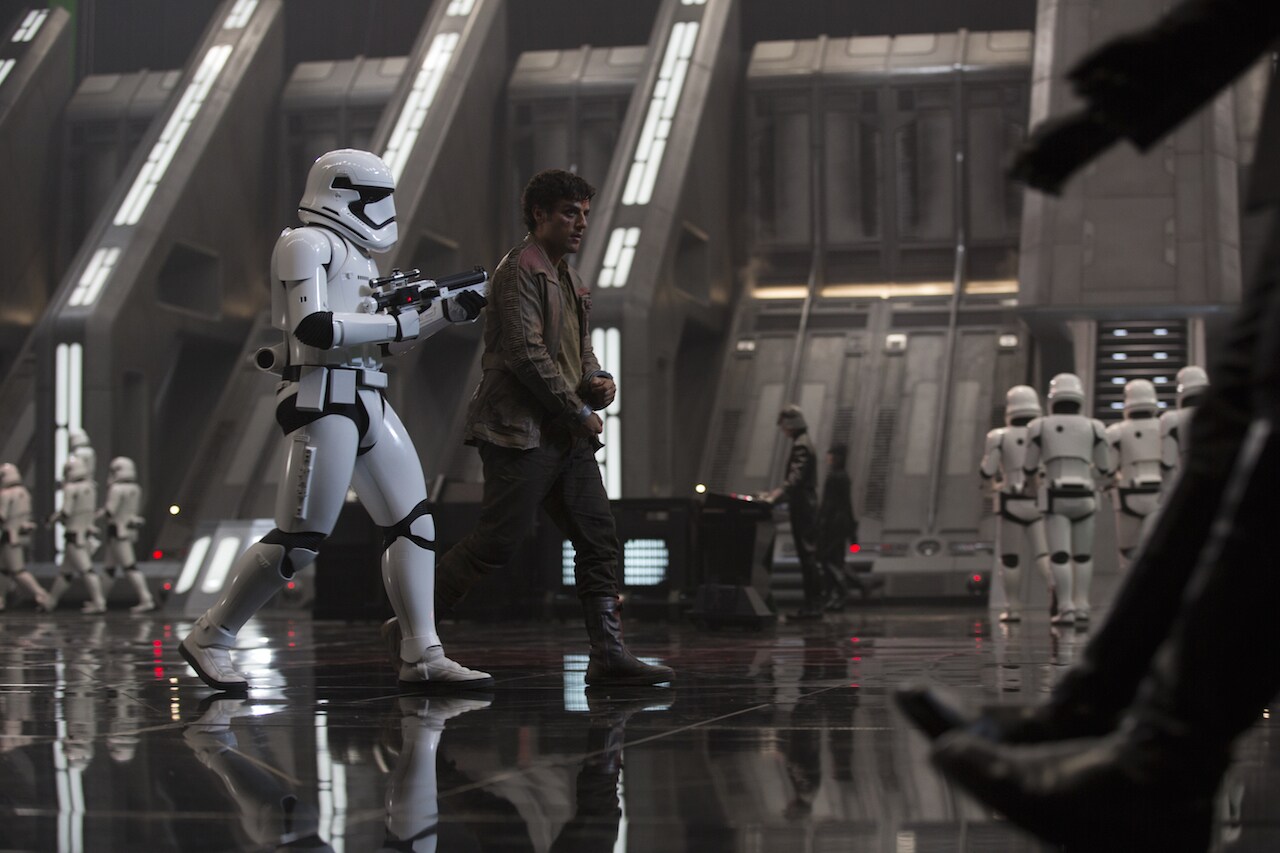 This was another incredibly brave plan off of Finn’s behalf. He was within hours, maybe minutes, of getting his mind wiped and transformed back into the mindless murderer that the constant story of the stormtrooper is but he came up with the brilliant escape plan to save the Resistance pilot, Poe, hijack a TIE fighter, and get away from the evil First Order as quickly as possibly. Of course, the plan didn’t exactly transpire as he would’ve liked but it was still an impressive attempt at desertion.