The Last Jedi introduced a lot of cool new things but two of the undoubtedly cooler additions to the film were the vulptices and the porgs.

The vulptices, the beautiful crystal foxes native to Crait, are absolutely gorgeous creations. In fact, I think they are the prettiest alien creatures I have ever seen in Star Wars and that’s not an exaggeration.

And the porgs are undoubtedly the cutest creatures that have been introduced in Star Wars, past the teddy bear Ewoks which I used to love but now I despise. 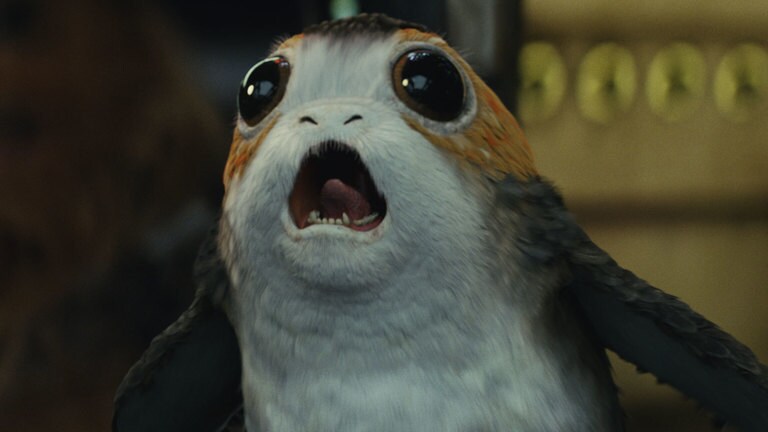 They are round and furry, their cries are cute, their large black eyes can reel you in and leave you oohing and aw-ing for no particular reason other than the fact that they’re so adorable, and they’re just cute period. They stole the heart of Star Wars fans around the world and even though I was hesitant at first they’ve captured my heart as well. But here’s the thing, between the vulptices and the porgs, which of these new alien creatures are my favorite?

That’s a very hard choice because they’re so different on so many levels but they both leave me with the same fascination. The porgs are cute, yes. I mean who can’t practically melt seeing the Porgs fiddle with a lightsaber or sit on Chewbacca’s shoulder. And the vulptices are not only mesmerizingly beautiful but they were also heroes as they helped lead the Resistance to the one exit from the rebel base.

I think, for me, the vulptices are my favorite. Even though they didn’t have as much screen time as the Porgs who will undoubtedly make more adorable appearances in Episode IX (remember they inhabited the Millenium Falcon) whenever they were onscreen they stole the show for me. If I was in the Star Wars universe I would definitely have one as a pet, that’s how awesome they are.

But I still am a Porg fan though. 🙂

I thank you for reading and I hope you have a very magical day. May the Force be with you.

10. Spider-Man and the Washington Monument Rescue

This is a great action scene because it’s the first time Peter Parker in Spider-Man: Homecoming had to really become a hero as he saved his school mates from eminent death as they experienced an elevator accident in the Washington Monument. It’s also a visually enticing scene as Spider-Man scales the Monument all the way to the top. The view from the top will give you vertigo, it’s so high. All in all, it’s my favorite action scene of the movie.

9. The Chase Through New York

Doctor Strange is one of my favorite Marvel movies because it is one of the coolest and riskiest Marvel ideas they brought to the big screen. Doctor Strange is not an easy character to bring to the blockbuster world. His world of realms, magic, and psychedelic visuals could’ve been a huge mistake for Marvel to introduce into their movie timeline but they prevailed by arranging a stellar cast to tell this story and making a highly enjoyable film. And the action scenes, wow, the action scenes were out of this world, sometimes literally. I remember watching this scene in IMAX and simply being blown away. I have watched this movie over a dozen times and I still haven’t seen everything in this part.