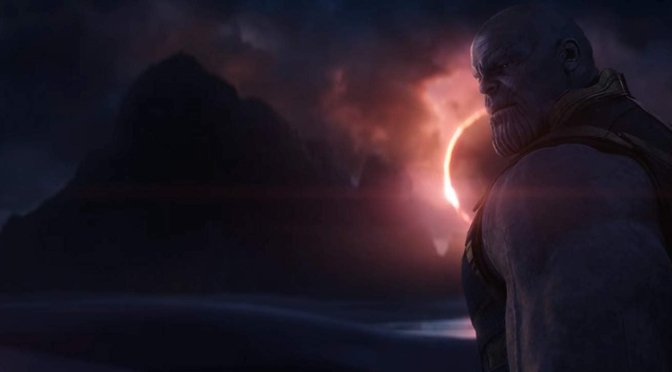 The Marvel Cinematic Universe has gradually cemented things that we expect to see in each of its installments such as its patented humor, the end-credits scene, and the moment the very end of the credits when it says, “Such and such will return.” Knowing that a certain hero will return always is exciting because we are given a promise that yes, we will see them again. And Avengers: Infinity War wasn’t an exception but there was a twist that I only just noticed yesterday.

I watched the entire credits, including the haunting end-credit scenes that sets up Captain Marvel, and then at the end it didn’t say The Avengers will return or the Guardians of the Galaxy will return. It said Thanos will return. And that’s the genius behind the construction of Infinity War.

While every film in the Marvel Cinematic Universe has focused on the heroes at hand the real story revolved around Thanos. He was a villain that this franchise had been building up to for ten years. When he arrived the writers knew they needed to give him a proper introduction and so they created a story that wrapped around him. They wrote him as the protagonist, not the antagonist, and that’s the reason why he wasn’t left in the weeds to get swallowed up by all of the incredible heroes.

I always figured that the writers created the movie with him at the center of the story but the fact that it said “Thanos will return” at the end of the credits confirms that.

This also confirms how fragile the stage is for the heroes moving forward. We know there are a certain group of heroes who survived the infamous finger snap but do we know they truly will survive this next film. It’s scary to think that by the end of Avengers 4 there will be concrete deaths. I’m nervous to see what happens because I’ve grown so attached to these characters.

For me, this was a fun discovery and I can’t to see what other new things I’ll find in the confines of the movie.

Episode IX is officially under way and to celebrate yesterday’s first day of filming for the movie J.J Abrams shared a vague behind-the-scenes photo commemorating the beginning of this incredible journey that we are about to partake on. Here’s the tweet.

Bittersweet starting this next chapter without Carrie, but thanks to an extraordinary cast and crew, we are ready to go. Grateful for @rianjohnson and special thanks to George Lucas for creating this incredible world and beginning a story of which we are lucky to be a part. #IX pic.twitter.com/FOfnGwVut5