After Henry Cavill stepped down from the role of Superman in a shocking announcement that rocked the internet people have already begun wondering who the next Superman should be. One choice that has fans super excited is the prospect that Creed/Black Panther star, Michael B. Jordan will assume the role of Superman. If that were to happen it could change how we view iconic superheroes, for it would be the first time a black man played the role of Superman.

Now while I totally support that and think that would be very awesome the idea of Michael B. Jordan playing Superman doesn’t exactly sit well with me.

He’s a great actor, no doubt about that, but one thing you never want to do is to saturate an exciting talent. Michael B. Jordan did such a fantastic job playing Erik Killmonger in Black Panther that I kind of can’t see him in any other superhero type of role, leastwise as Superman!

It’ll feel a bit strange seeing him transition from Marvel to DC in that way and I don’t think it would be a great idea. Now I’m sure he could easily pull it off but I just don’t know if I want to see him as Superman.

But, at the end of the day, it’s up to the producers behind the DC Universe. If they like the idea of Michael B. Jordan as the next Superman then I’ll have to wait and see whether it’ll be awesome or not. And if it is awesome I’ll be even more of a Michael B. Jordan fan.

This is just my opinion on the Superman recasting situation. Honestly, I don’t know who should be the next Superman but I can’t wait to see who it’ll be. 🙂

I have never watched Mary Poppins. The only thing I know about Mary Poppins is the “Supercalifragilisticexpealidocious” song and the other song that says, “Just a spoonful of sugar makes the medicine go down.” Besides that Mary Poppins is just as much of a mystery to me as Dumbo. So today the official trailer for the Mary Poppins sequel came out and I, of course, watched the trailer. Here it is.

After seeing this trailer I want to watch this movie now. First of all, I love Disney movies. In fact, the first film I ever watched in IMAX was Alice in Wonderland.

There’s something so distinctly magical about these live-action Disney films that are awash in vibrant color and stunning characters, creatures, and fantasy worlds and this movie is no exception.

At first this trailer had me a bit bored and uninterested but then as the trailer got better my awe grew more and more and by the end I was covered in goosebumps, I had a smile on my face, and I was completely wowed by what I had just experienced just from the trailer! It was as if I had gone on a magical ride with Mary Poppins herself in this tantalizing teaser.

And I can already say this. Emily Blunt is a GREAT Mary Poppins. 🙂

I thank you for reading and I hope you have a magical day. 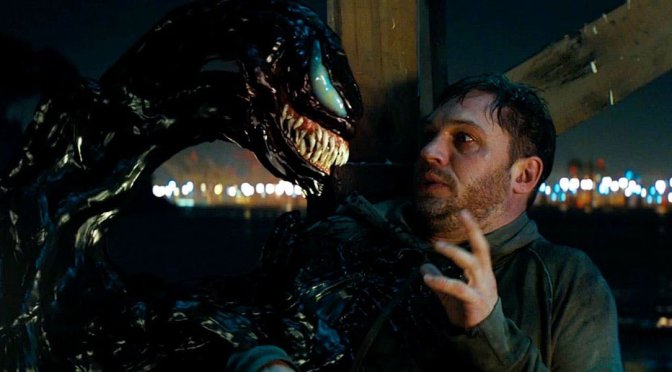 Three weeks ago I wrote a post displaying my opinion on whether Venom should have a PG-13 or R rating and just this past weekend the film’s official rating has been released along with its run time. As you can see from this post’s title the film will, indeed, be PG-13 after all which totally makes sense. Sony is trying to make as much money as they can with this movie and that means appealing to a wider base rather than focusing on just adults.

Sony also issued a statement for their reasoning behind the rating saying they wanted to give Venom a PG-13 rating so that Venom may confront Spider-Man in the future (remember, Tom Hardy has already signed on to three Venom movies.)

Even though it’s not going to be rated R that doesn’t exactly mean the film won’t be in any way scary. For the longest time I thought The Dark Knight was rated R because of its disturbing imagery and The Joker’s troubling antics but turns out it was PG-13. That proves that a movie can be PG-13 and still be as dark as any rated R film.