So if you’ve been keeping up with Disney you know the company is making a streaming service that’s set to come out next year called Disney Play. This streaming service is going to deliver exclusive content to everyone for a minimal fee. That includes new Star Wars content, Disney films, animated exclusives, but it also seems that the service will give us some exciting new things to look forward to with Marvel as well.

A few weeks ago it was announced that the streaming service would feature television shows focusing on two Marvel favorites; Scarlet Witch and Loki. Whether Elizabeth Olsen and Tom Hiddleston will reprise the roles is still a mystery but the talk of these series has been circling. But now there’s been an update.

As of yesterday, it was announced that Anthony Mackie and Sebastian Stan would reprise their roles as Falcon and Bucky a.k.a The Winter Soldier for a limited series on the Disney Play streaming service. And get this. It’s already found a writer for the series. Now, how exciting is that?

Falcon and Bucky are some of my favorite heroes in the MCU but they’re never given much to do other than be awesome sidekicks. Well, that changes with this limited series and I can’t wait to watch it. It’s going to be awesome!

How do you feel about this news? I’d love to hear your thoughts in the comments below.

It’s a beautiful day for it to be Halloween and to keep the spooky theme going I’m going to share with you the five moments that I have found to be the scariest in Star Wars. Enjoy!

5. The Mynock on the Window

I think all Star Wars fans can agree that this scene is easily one of the creepiest scenes in Star Wars. Leia’s scream-of-terror reaction says as much. The Mynocks are disgusting creatures (as you can see from this picture) and so it wasn’t a hard decision to add this to this spooktacular list.

Okay, if you haven’t watched The Clone Wars then you will have no idea what this is but let me tell you…it’s creepy. Yoda, through a trio of episodes, finds himself on a spiritual journey after being visited by Qui-Gon’s ghost. During that journey, he finds himself face to face with this evil side. It’s an ultra creepy moment that made me realize how glad I am that Yoda never turned to the dark side.

END_OF_DOCUMENT_TOKEN_TO_BE_REPLACED 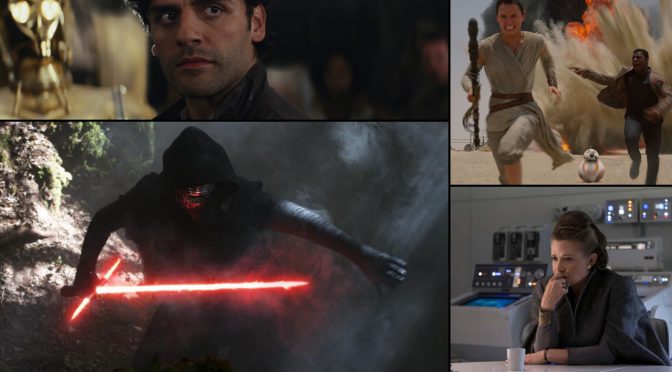 With every installment in a Star Wars trilogy, it is safe to assume that the major characters’ wardrobe will change which is always one of the exciting factors of a new Star Wars movie. The major characters presented in The Force Awakens were incredible heroes and villains with their own sense of style and that style stretched onward into The Last Jedi as each character obtained a new outfit. Some looks were better than others but I’m here today to compare those looks with you all. Enjoy! 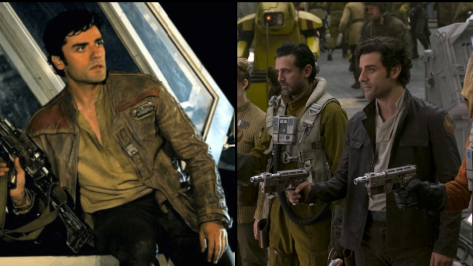 Poe Dameron doesn’t have the flashiest outfits that have ever been seen in Star Wars because the Resistance is, in essence, a ragtag band of rebels who refuse to let the First Order take over the galaxy. HIs clothing represents that rugged quality of the Resistance.

In The Force Awakens, he had a look perfect for that of somebody visiting the sweltering Jakku; his specially made jacket that’s basically a casual suit of armor, the open-necked shirt for temperature control, and then he’s got his regular pair of pants and boots.

In The Last Jedi, his look was a tad bit more conservative and officer-like. His new jacket, a dark blue one with the Resistance symbol on the shoulder screams rebel fighter, his newest shirt is fashioned more for outer space with the lack of the open neck look, and his pants’ color matches the jacket.

I love both of these looks. They’re simple yet perfectly match Poe Dameron. But I think I would have to say…I like The Last Jedi look a tad bit more.

END_OF_DOCUMENT_TOKEN_TO_BE_REPLACED

I’ve been watching Star Wars since I was a child and just saw Halloween for the first time a few days ago. Darth Vader is one of the most iconic villains of all time and Michael Meyers is also an antagonist that whether you know the film or not you know who Michael Meyers is. But there is another similarity between these mask-wearing villains that is both disturbing and brilliant at the same time and that is their heavy breathing.

Darth Vader can be detected as soon as you hear that iconic breathing that makes him the character we know to this day. That breathing is what made him frightening and what also made him stand out amidst his antagonist brethren but it seems that he’s not the only character that can be recognized by the heavy breaths.

Throughout Halloween, a lot of times the director, John Carpenter, would mess with the viewer by having us only hear but not see Michael Meyers. Like in this scene for example. You can’t see Michael Meyer’s face but you can hear him breathing very heavily in an unnerving fashion. And it’s this way throughout the rest of the movie as well.

END_OF_DOCUMENT_TOKEN_TO_BE_REPLACED

Star Wars: Resistance began with a few episodes that were good but weren’t great and I couldn’t help but feel a bit disappointed. So, last night I watched the latest episode but as you can suspect I wasn’t that interested. I figured it was going to be like all of the other episodes I had seen; semi-boring. It wasn’t.

With it being the fifth episode in the series so far The High Tower shines in ways that are very promising for the future. We’re finally getting a bit of First Order action in this latest episode and Kazuda Xiono delights as he takes us, the viewer, on a wild 22-minute adventure that is jam-packed with thrills and laughs to the end. END_OF_DOCUMENT_TOKEN_TO_BE_REPLACED

Love is a powerful thing. It mends hearts, brings people together, provides happiness to even the most sorrowful, and it is a beautiful thing to observe. Love stories are some of my favorite movie storylines and superhero films always provide a good love story. So, on that note, this is the topic of today’s Who’s Your Favorite? I hope you enjoy.

While this romance was doomed from the beginning it still is a beautiful relationship nonetheless. Vision, an android looking for purpose and understanding in the world, found love as his relationship with Wanda Maximoff grew. And Wanda, who lost her brother in the Battle of Sokovia, was also trying to find her place among her fellow Avengers. Vision helped fill that void that she possessed and it wasn’t long before her friendship grew into something more.

It’s a shame that we weren’t able to see more with them as a couple but then again, who knows what the future holds. 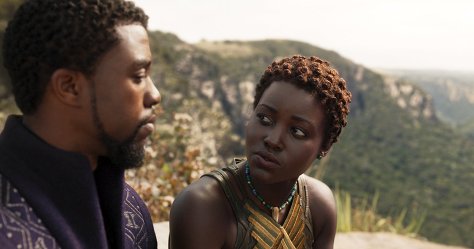 A simple yet perfect relationship. Nakia, as an independent woman, didn’t let her past relationship with T’Challa hold her down to remaining in Wakanda as a Wakandan housewife for the rest of her life. And that is what is so beautiful about this relationship. Their willingness to hear each other out and be there for one another when the need arises is very touching.