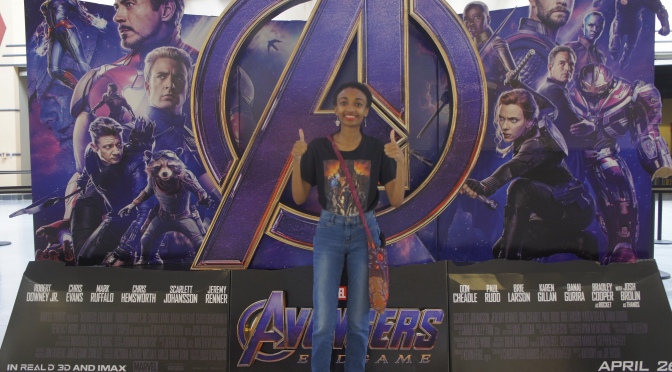 Six hours ago Avengers: Endgame ended. As the credits started rolling and I walked out of that theater I had to contain my composure and not break down balling as I left the theater. Yes, I was crying a waterfall of tears…literally. My eyes were so red from all of the crying I was doing that, according to my wonderful sister, they were about the same color as my red lipstick. No joking.

This movie got to my emotions so many times but literally the last scene, well, it was quite a doozy.

Avengers: Endgame is definitely a beautiful homage to all of the Marvel films that have come before in the MCU. If you’re not familiar with some of the movies in the MCU, Endgame is going to leave you baffled and a slight bit confused because there’s SO much going on. I mean, it was fan service at its finest.

Throughout the movie I found myself laughing, cheering, clapping, but most of all crying. There was a certain portion of the film that was so jaw-droppingly fantastic that I literally cried for I think two-three minutes straight. It was that awesome.

Because there were so many fantastic surprises in the film I will be dropping my spoiler-filled review tomorrow because I am bursting at the seams with excitement about certain things in the movie that I definitely want to share with you.

But until then I’ll leave it at this. Avengers: Endgame is a satisfying finale to a fantastic story. Was it perfect? No. It had its various flaws that’ll shine a little brighter with more viewings but I will also say it is far from disappointing. The movie was pretty good but its second half pushed the film over the top to awesome land.

I’m giving this movie 95 out of 100 and 4.5 out of 5 stars. Like I said before, it’s not a perfect movie but it hit all of the marks and definitely sits in my top five list for movies in the MCU.

One thought on “My Reaction to ‘Avengers: Endgame’”