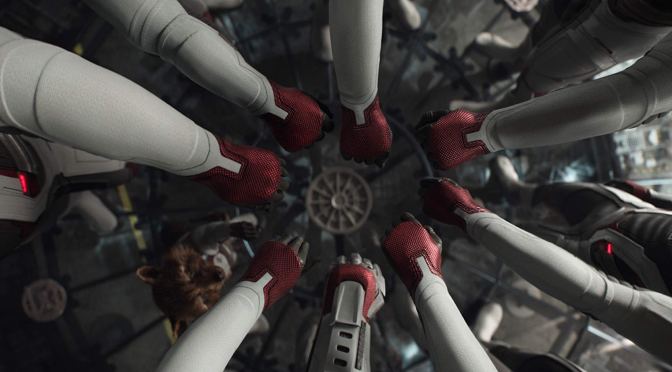 Avengers: Endgame marks the end of the Infinity Saga; a fantastic storyline that has been built over twenty-one movies and eleven years. It’s an amazing thought. When Iron Man came out in 2008 I wasn’t even ten-years-old yet. Now I’m twenty writing this review and it’s just…wow.

Yesterday, as I left the theater struggling to contain my composure, it didn’t really dawn on me that this was the end of an era. Yes there will be more movies in the MCU and yes the story isn’t over but in a way, it is. To delve into further meaning about this saga’s ending would mean I would have to include spoilers but because this is, in fact, a spoiler-free review I’ll just keep things very basic.

So, first off, one of the questions I had going into the film was whether it would continue emotionally where Infinity War left off? It did. This film takes the stakes and the emotional content to an all-time high, leaving me teary-eyed at many moments in the film. Let me think to myself, how many times did I nearly cry or straight-up start balling? I think I nearly cried maybe seven times while watching the film and I definitely cried a river of tears three times during the movie.

Infinity War was devastating but it definitely didn’t hit my heartstrings as much as Endgame did. For this to be a superhero film with an epic finale sort of vibe the movie focused highly on the heart of the movie rather than the action. Not to say that there weren’t any action scenes because there were…and they were amazing, but they were far and few compared to the emotional content and interactions displayed between the characters.

Avengers: Endgame was, in essence, a love letter to Stan Lee and the incredible characters that he has helped create over the years. Infinity War was the ultimate doom movie that left us feeling hollow. Endgame was about taking The Avengers at their lowest point and showing us, the viewers, how fantastically heroic each of the heroes were in their own, individual ways. Each character got a shining moment that left a particular bow on their story arcs. Each character had an emotionally stirring moment that left me rather teary. And each character had a conclusion in this Infinity Saga that was perfect for their particular journeys.

Now, at the moment, I can’t definitively say Avengers: Endgame is my favorite Marvel film of all time but it’s pretty darn close. There were elements to the movie that are actually a tad bit confusing and left me scratching my head and some scenes were an eensy-weensy bit corny but the second half of the film made the three-hour long experience totally worth it. In fact, Avengers: Endgame is three hours and two minutes but it doesn’t even feel that long.

The movie couldn’t have been any shorter and if it had been longer it would’ve dragged on. The timing was perfect and was a fitting runtime for this fantastic finale.

Oh, there is so much I wish I could discuss with you all about the movie but I’m going to wait and watch it a second time before really delving deep into Spoiler-ville which will probably be sometime next week.

Until then, I can definitively say Avengers: Endgame is easily one of the best superhero movies ever made, I haven’t cried that hard in a movie theater since I watched The Force Awakens (remember Han dying?), and I can’t wait to see it again.

And by the way, Hawkeye is easily one of my new favorite superheroes in the MCU. I love Hawkeye!

9 thoughts on “My Spoiler-Free Review of ‘Avengers: Endgame’”