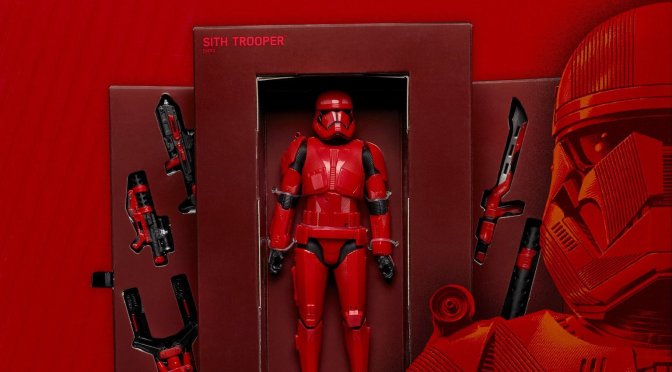 The Rise of Skywalker is arriving in less than a year and LucasFilm is moving full speed ahead in beginning marketing for this imminently incredible Skywalker saga finale. It’s been rumored for months now that a new stormtrooper would be making its debut in this film and now that stormtrooper has finally arrived for us to look at in full detail.

Mind you, the photos surrounding this stormtrooper is through marketing for the film rather than in motion in the actual movie but it’s still a chance to see this new First Order soldier. EXCITING!

Before I show you what it looks like this is what it’s called: the Sith Trooper.

This picture for a shirt available for purchase at San Diego Comic-Con gives us an in-depth look at the trooper’s helmet design. Is it just me or does this trooper seem meaner?

While this is, of course, a toy it’s still fascinating to see the new trooper.

And, as is seen in this display, the Sith Troopers come complete with a bunch of different weapons. Yep, it’s basically the Praetorian Guards 2.0. Um…oh snap! Is it just me or this movie getting cooler and cooler with every extra detail we learn about the film?

The question is then, can these stormtroopers aim straight? 😁