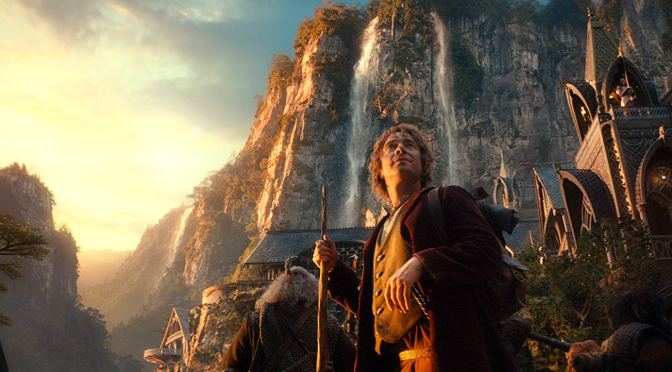 Twenty days ago I started a near three-week enduring The Lord of the Rings marathon where I slowly but surely watched all three Extended Editions of The Lord of the Rings Trilogy. In short, I had a blast. But that led me to want to watch The Hobbit just to remind myself why The Hobbit Trilogy wasn’t as good as The Lord of the Rings films. Of course, I wasn’t going to torture myself and watch all three Hobbit movies. Instead, I went straight to the best installment, The Hobbit: The Desolation of Smaug, and it was a blaring realization why these movies weren’t nearly as good.

First off, how come we have much better technology nowadays than Hollywood had in the early 2000s’ and yet the CGI looks way worse? Like George Lucas, Peter Jackson got a tad bit lazy and didn’t want to work as hard on the practical effects, electing to rely heavily on CGI. While that is perfectly fine it can be disastrous if the CGI isn’t good–and The Hobbit Trilogy‘s CGI is mediocre–it leaves the film looking terribly artificial.

Two, the forced romance. In The Lord of the Rings, there was the love story between human king-to-be, Aragorn, and the elven princess-of-sorts, Arwen as well as Eowyn’s serious crush on Aragorn that amounted to nothing but the romantic thing between elven warrior, Tauriel, and Kili simply pales in comparison.

Yeah, Kili may somehow look prettier than most of the elves but why did Peter Jackson have to force romance into a story that had no romance incorporated whatsoever? Because The Hobbit is an adventure that has these dwarves constantly on the move trying to establish a palpable love between the dwarf and elf feels ludicrous.

Now, if Peter Jackson wanted a love story that badly, he should’ve stuck with the idea of Legolas’s relationship with Tauriel. You see, their friendship was already established leaving a path towards romance way more convincible. Wouldn’t it have been so much better if Tauriel would’ve (sorry Tauriel) died in the Battle of the Five Armies and in that happening Legolas, who would’ve lost the woman he loved, would’ve left the Woodland Elves behind to forge his own destiny? That sounds like a great storyline that would’ve added an extra layer of depth to his already fascinating character. Not this long-distance fling between this pretty dwarf and a lonely female elven Captain of the Guard.

Come on Peter Jackson, you’re better than that.

Three, one of the reasons why The Lord of the Rings movies were so good was because the characters were so engaging but I cannot say the same thing The Hobbit. The dwarves, first of all, don’t feel as dwarfish as Gimli which may seem strange but Gimli was undoubtedly the perfect dwarf. Two, while I like Bard and Legolas and Tauriel and of course Bilbo they alone cannot elevate the movies in the way every single Lord of the Rings character did.

Four, Peter Jackson was working way too hard to remind us that Sauron was stirring the pot in taking over the world. Yeah, we get it, Sauron was ready to return and bring Middle-Earth into Sauron’s domain but geez, from having the Great Eye painted with blood on an elven statue to Gandalf actually confronting the dark lord face to face it was a bit much. Even having Frodo at the beginning of The Hobbit: An Unexpected Journey. It’s as if Peter Jackson was trying to hammer home that these movies were, indeed, connected to The Lord of the Rings movies.

And five, at the end of the day, The Hobbit was never better than The Lord of the Rings so honestly, what do you expect. The Hobbit was just a precursor to an epic story that, brought to the big screen, is still unlike anything we’ve ever seen. The Hobbit could’ve easily been better but he did a pretty good job with what he had to adapt to a movie.