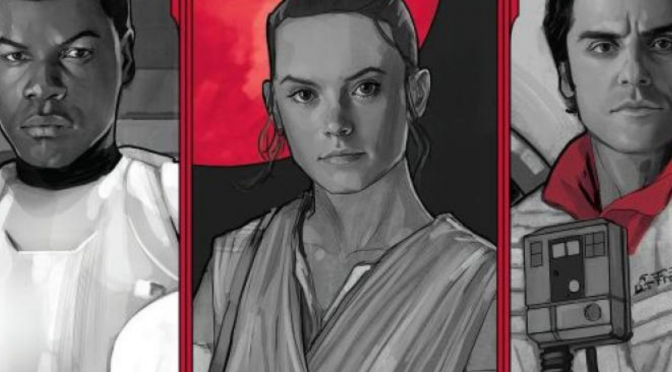 Today reaches the conclusion of my three-part review for Before the Awakening, a book focusing on the sequel trilogy’s three most important heroes; Rey, Finn, and Poe Dameron months, years, and days before The Force Awakens. Because each story was so fantastic I had to break this review up to give an adequate analysis of each section and unfortunately, the final part was the most boring.

Of course, you must be wondering why and that is why it is my job to inform you why I’m having these emotions when for the past two days I have written nothing but praise for the book.

The answer is simple; it was boring.

I love Poe Dameron and while the beginning of the story was really interesting as it revealed to us a hint at his life growing up and his undying love and respect for his parents and their fight against the Empire. Seeing young Poe Dameron in an X-Wing with his mother is such a cute thought I was instantly sucked into the story. And then, it basically became like all of the Poe Dameron comics; an action-packed story.

I love action and I understand why his story raced across the pages with such blinding speed. Poe’s basically an action hero. He craves it just as much as he craves breathing. But compared to the other two stories, which really focused on shedding a complex and personal light on Finn and Rey’s evolution into the heroes that they are in The Force Awakens, this story didn’t do that as much.

As a Commander in the New Republic, Poe’s daily missions are pretty standard and boring. It’s always a patrol around a certain system with three other pilots who are just disinterested with their daily job. And then one day the First Order arrives on their doorstep and it becomes very clear to Poe that something’s happening in the galaxy that the New Republic is trying to brush away despite the fact that a real threat is emerging.

The story introduces us to Poe’s first official meeting with General Leia Organa as well as his less than glamorous induction into the Resistance. The story also heavily highlights the First Order’s growing presence which only makes their reign in The Last Jedi all the more chilling.

But beyond that, the story doesn’t delve too personally into Poe’s life, which was a bit of a bummer, if I’m being honest.

One thing the story did highlight in clear abundance, however, was Poe’s serious piloting skills. It’s freaking amazing! At one point he’s taking on twelve, yes I said twelve! TIE Fighters by himself and all I could do was read the scene in apparent awe. Poe’s skills have been on display in The Force Awakens and The Last Jedi but never to this extent.

I’ve praised Poe on being the greatest pilot in the galaxy but this story definitely confirmed that fact. He is 100% incredible.

While his section of the book wasn’t nearly as captivating, in my opinion, as the other two sections I still found it enjoyable because hey, anything involving Poe is likable to a certain extent.

I’m giving it an A- and that’s only because it was slightly boring.

And, tying all three reviews together, I’ll give the book a solid A. It’s a must-read for any Star Wars fan, especially if they truly love these three characters like I do.

I thank you for reading and I hope you have a splendid day. May the Force be with you.