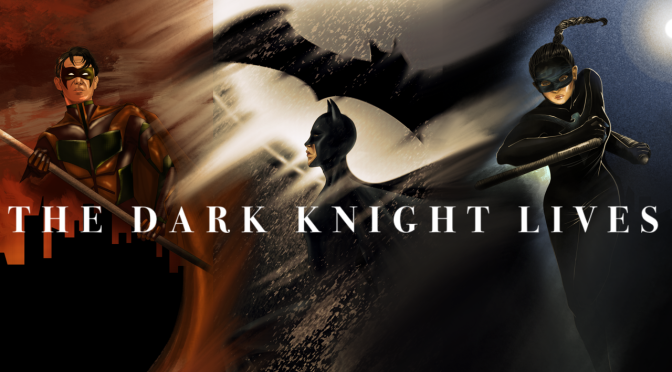 Katherine Kane was sitting on the couch in the living room of her rugged three-room apartment watching the news. Her stony gaze was locked onto the television screen as the footage of the four bodies being pulled out of the river was being shown over and over again, news analysts and reporters relaying the horrific scene.

Every window in the apartment was closed, keeping each room in persistent darkness but Katherine liked it that way. Sometimes she didn’t want to see the light of day. Sometimes the beautiful sky reminded her of what she had lost.

Looking at the grim news also refreshed her memory of the worst day in her life.

She sighed, sitting back as she ran a hand through her dark tomboy cut hair that was dyed blond at the ends. She looked over to the glass decorative table beside the couch and her eyes fell upon the single picture that sat in a beautiful wooden frame. Despite herself, she picked it up, gazing morosely at the photo that had been taken five years ago.

In the photo, she and her little brother, Kirk Kane, were making faces and throwing goat hand signs. They had been at a rock-and-roll concert and clearly, they had a tremendous time. They had been the best of friends, doing everything together, but there was always a sense of sadness behind the joy, as they were orphans.

Both of their parents had been part of the police force and both had died doing what they believed in; saving lives. Before their deaths, they had been a happy family. That was before the dark days–before The Joker arrived.

One night her father left home late when he was called into duty for a crime. That night, he didn’t return home. The next morning there was a knock at the door. Her mother had gone to the door with tears in her eyes. She knew what had happened. He would become one of the Joker’s many unfortunate victims.

Katherine was ten at the time. Her brother Kirk was seven.

Eight years later, Bane arrived. Her mother, still a humble cop striving to keep Gotham’s corrupt streets somewhat safe, went into the tunnels for the “drill.” She was one of the first to die as she was caught in the explosion that would trap the cops under the city for months.

She and her brother were supposed to be well off but were bamboozled out of their parents’ life insurance money by the very insurance companies who were sworn to help them. But…Katherine found a way for her and her brother to survive, with each of them getting jobs and finding a small apartment to live in down on the poorer side of Gotham. It wasn’t a penthouse or a fancy neighborhood but it was home.

But, as crime started to rise in the surrounding area, Katherine realized she needed to get her and her brother to a better neighborhood away from the growing gangs of thugs. The realization arrived too late.

One day, she returned home from work only to find that her apartment had been broken into. The place was a mess, a few valuables had been taken, and her brother was missing. Katherine hadn’t even waited for the police.

She took the gun her father had given to her as a kid and went looking for him. Her parents had taught her a few tricks on how to solve crimes and plenty of self-defense techniques and she used that knowledge to locate her brother but it was too late.

She found him in an alley, beaten black-and-blue. He was still breathing but barely. Katherine had called for help, staying by his side the entire time. On the dirty brick wall of the alley where he laid a crude depiction of a penguin had been spray painted. It was the symbol the most dangerous gangs were throwing up after every heinous crime they committed.

When the ambulance had finally arrived it was already too late. Her brother was dead in her arms.

She had cried so many tears that day she couldn’t even cry anymore. There was just a painful emptiness that resided in her breast. She believed the pain was the direct result of having a piece of her soul ripped away after losing Kirk. That had been three weeks ago.

Since the morbid funeral a couple of days after his death, she had mostly stayed in her apartment. She had only ventured outside when she shuffled over to the corner market, buying tubs of ice cream, boxes of beer, and packs of cold sandwich meat to sustain her while she wallowed in her depression.

There was a young African-American man named Marcon who lived across the hall who had her offered his condolences. She had appreciated it. He had even offered for her to live in his apartment so she wouldn’t have to be alone. It was a kind gesture but she preferred to bask in her grief by herself, in the dark.

Looking at the news, seeing the gruesome deaths, it made the pain of losing her brother resurface. But as she stared at the photo, the anguish started to simmer and turn into anger.

There was too much death in Gotham. Too much sorrow coming to too many people in this city that she loved so much.

She placed the picture down on the table, stood up, grabbed her black leather jacket, and left her apartment. Marcon was coming up the stairs, clearly having just gotten off of work, as she stopped to lock the door of her apartment.

When he saw her a genuine smile came to his face. “Haven’t seen you in a while.”

She nodded at him in response before moving past him, heading down the stairs to leave the apartment complex.

“I’m happy to see you,” he called after her.

This stopped her in her tracks as she found herself incredibly moved by his kindness. She looked back at him.

She then continued on, Marcon staring after her.