My sister and I love Star Wars, as you can probably tell, and we’re both very excited for The Mandalorian and The Rise of Skywalker. My sister, being an artist, gets to celebrate this franchise in exciting ways through art and recently she’s begun to take certain characters and make comic strips for them. And because they’re awesome I wanted to share them. Enjoy! 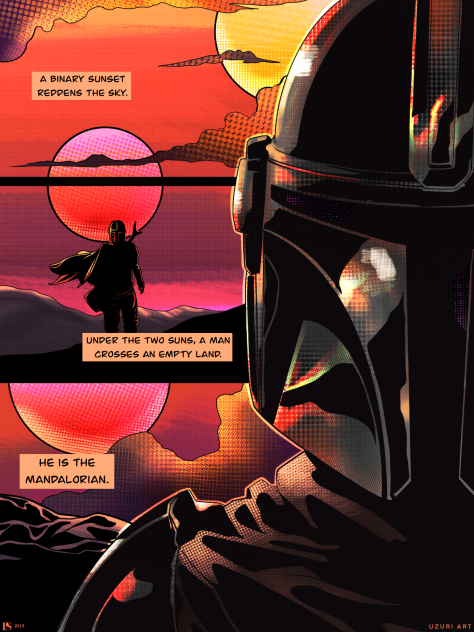 I can’t get enough of this comic. The colors, the gleam on the helmet, the way his cape flows in the wind, this comic screams awesomeness, as does this character. END_OF_DOCUMENT_TOKEN_TO_BE_REPLACED

It was a fascinating approach to her character and indeed one of the best episodes in the series. Plus, the Darksaber lore was pretty fascinating too. END_OF_DOCUMENT_TOKEN_TO_BE_REPLACED

Danger in the Force

Ora felt a tremor in the Force. It was subtle. Almost entirely insignificant. But it was there.

It cut through her like a knife, warning her of something. A terrible danger awaited her. That much was obvious. But there was something else and she couldn’t quite place it.

Sometimes the Force frustrated Ora. Rey taught her to be mindful of the Force. To listen to its beckoning and whispers of truth. To feel the Force around her, through her, and in her. But at times like these, when the Force was speaking to her in ways she couldn’t comprehend, she wanted to fight back and take action instead of being mindful.

And then she felt it. Like a blow to the chest. There was a desperate call for help followed by a terrible scream. Her eyes widened. END_OF_DOCUMENT_TOKEN_TO_BE_REPLACED