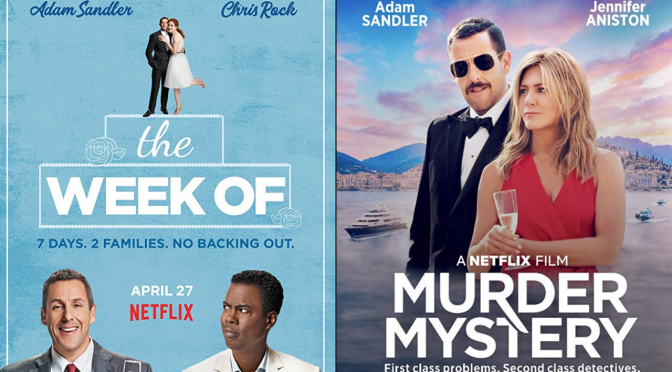 Yesterday my family and I went on a Netflix binge involving watching two Adam Sandler comedies; Murder Mystery and The Week Of. One was hilarious and truly enjoyable, the other was disturbing, totally awkward, and yet hearteningly believable. If you’ve seen both of these films you probably can tell which description fits which movie. After watching both Netflix Originals I found myself feeling a palpable sense of joy and as I went to bed I couldn’t wait to wake up this morning and share with you my experience watching these films. So on that note, here are my reviews of The Week Of and Murder Mystery. 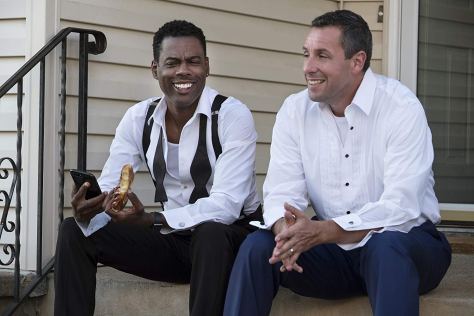 The Week Of is a very long, very disturbing, very awkward, very realistic take on what would happen if two families of a bride and a groom have to stay together for a week. Personalities clash, everything is just…strange, egos are high, it’s just a hot mess. And yet, with its rotten 27% score on Rotten Tomatoes and 5.1 out of 10 rating on IMDb, it’s pretty safe to say that it’s not regarded highly by its viewers. However, as a writer, I found an appreciation for the movie simply through the incredible sense of storytelling provided by Adam Sandler and Robert Smigel.

Here are these two families, people are talking nonstop, confusion is very present, Adam Sandler’s Kenny Lustig and wife, Debbie (played by Rachel Dratch) holler at each other in a room upstairs while everyone goes about their business, pretending as if they can’t hear the argument taking place just above them. Chris Rock’s character, Dr. Kirby Cordice is rich but Adam Sandler’s blue-collar Kenny Lustig wants to be the big man and pay for his daughter’s wedding which, as the days go by, gets more and more hectic to fulfill accordingly. A family member (I won’t say who) dies. It’s just chaos for an entire week.

But, by the end, his daughter is married to her newlywed husband, Dr. Cordice’s son Tyler, tears are flowing, including mine which I barely manage to contain, and the unforgettably chaotic week comes to a close.

When the film ended I was hoping there would be a sequel. Maybe this time it could revolve around Thanksgiving which is always a fun way to bring families together. Unfortunately, because the film wasn’t received very well, there probably won’t be one.

What were the movie’s flaws?

It was long, too long, in fact. If it had been skimmed down by thirty minutes it would’ve been much better. And the characters in the film could sometimes be a tad bit too weird.

What were the movie’s bright points?

What I loved the most about the film is its realism. Family can have odd characters, life has its ups and downs, and I loved that Adam Sandler and Robert Smigel brought this family to life in a truly, human fashion. Nothing seemed too preposterous, there weren’t any overly silly moments, and the wedding sequence, while a bit long, was beautifully crafted.

I’ll give this movie 85 out of 100 and 3 out of 5 stars. It wasn’t great but I watched it all the way through and I became invested in the story. So, yeah, I liked it. 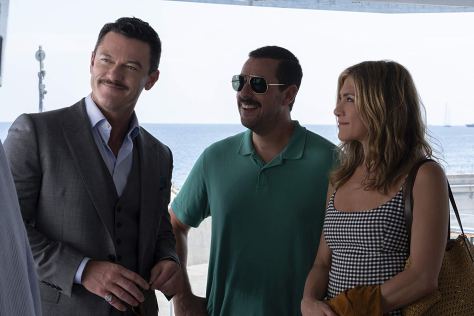 While The Week Of was a bit difficult to get through because it wasn’t incredibly funny Murder Mystery was actually really funny and very enjoyable. Adam Sandler’s Nick Spitz and wife, Audrey (played by, of course, Jennifer Aniston) finally have a long-overdue trip to Europe. While on a plane to Spain Audrey meets the incredibly dashing Charles Cavendish (Luke Evans) who invites the couple on his yacht.

The two very ordinary Americans are in the presence of royalty and ultra-rich people and it seems like the greatest vacation ever until the most important family member is murdered on the yacht.

What follows is basically a hilarious rehash of Murder on the Orient Express starring Adam Sandler and Jennifer Aniston as the detectives trying to solve the case. While the story was pretty predictable I’m glad to say I wasn’t able to figure out who actually was the murderer, making the reveal a welcome surprise. A whole bunch of people dies, some that will definitely shock you, and the ending was a bit corny but fun.

What were the movie’s flaws?

The silliness, for sure. It wasn’t the best movie I had ever seen, not by a long shot, but its level of hilarity was enough to keep me invested in the story and I had a great time.

What were the movie’s shining moments?

If the movie hadn’t been funny it would’ve been a total bore but because the humor was actually really smart and legitimately hilarious I found myself unable to tear my eyes from the screen. Plus, the characters were great. It was the perfect cast of actors to take on these roles and I loved it.

I’ll give this movie 89 out of 100 and 4 out of 5 stars. It’s definitely my favorite original Netflix film so far.

So, between these two movies, it’s very clear which one was better. If you’re bored and needing a film to watch (and you have access to Netflix) check these two movies out. They could provide you the joy you need and on a gorgeous day in these beautiful months of late spring what’s better than a good movie to watch?