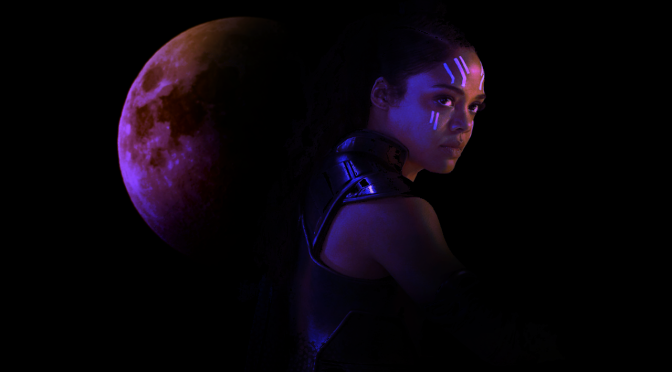 Sunlight was what woke Valkyrie the next morning. Groggily she woke, her eyes registering the bright streams of light pouring into the room from the window. She rolled over, expecting to feel Tarthon’s warm body next to her. Instead, she felt only emptiness.

Her eyes snapped open and she sat up. Tarthon was nowhere to be seen. She jumped out of bed, quickly throwing on some black leggings over her underwear and a tank top over her matching black bra. She then scrambled into her boots and charged across the room, opening the door of her apartment and looking down the hall. He was still nowhere to be seen.

“The big bastard,” she grumbled.

As she turned to go back into her living quarters she noticed the note stuck to the door. She ripped it off and began to read the scrawled scribble on the paper. It read:

Samantha. I wish I didn’t have to write this note. Gosh, I’ve never had more fun with someone than being with you. Don’t think of me harshly. I’m not a bad man. I had to leave because I’m the type of person who can’t stay tied down. I’ve got to keep moving, otherwise, well, I have my reasons. If I stayed one more day, I would’ve never left. Because I know, I was falling in love.

Please don’t take this personally. And honestly, you deserve better. I’m not the one for you. But whoever does manage to catch your fancy for as long as you or that person shall live, they’ll be lucky as I was to meet you.

Just…don’t forget me, will you.

Valkyrie smiled, a hint of wetness causing her eyes to glisten. She crumpled the piece of paper and tossed it into the trash, releasing a long sigh as she leaned against the door.

Looking up at the ceiling she whispered, “Don’t worry, Tarthon. I’ll never forget you.”

Her commlink blinked and suddenly it was a normal day. “Let’s see what the wormhole dragged in.”

Valkyrie piloted her ship to the junkyard, for that’s where the signal was coming from. Sure enough, she spied a mob of Eaters attacking a man down below. She parked the ship nearby, clumsily at that. She thought Tarthon’s leaving hadn’t affected her but after taking down five of her favorite beverages while getting dressed for a day of work, all of which were very strong, she was positively tipsy.

As her ship’s ramp opened she finished off yet her sixth drink and tried to walk as steadily as she could down the ramp to the mob of Eaters who was staring at her.

Suddenly, the world didn’t seem as straight. Next thing she knew, she had fallen off the ramp into a pile of trash. Ugh. That putrid stench was enough to shock the senses.

As the mob ignored her and got back to beating up…whoever they were beating up, she raised her hand.

“Wait!” she yelled as she tried to stand.

The mob turned to look at her.

She stood, albeit shakily, before taking a deep breath. Why was everything fuzzy?

“He’s mine so if you want to eat this fellow, later on, you’ll have to go through me,” she told them.

The mob seemed bored. “More food,” their leader said, walking toward her.

She was actually quite shocked by his audacity. Didn’t he know who she was? Hadn’t he heard of her in the fighting rings on the weekends? In short, she was a beast. It was how she had gotten this job as a Scrapper.

She shrugged. “Alright then. I guess I’ll go through you.”

She tapped her gauntlets. As usual, they didn’t work at first. But when they did she threw her arms forward like they were holding machine guns. In succession, the arms on her ship flared to life, copying her every movement, before obliterating the screaming mob in a blue barrage of power.

When there was nothing more than shreds of clothes she put the ship back into neutral mode. Funny thing, there was one fool left who came running at her, screaming like a crazed lunatic. This would be too easy. As he swung at her head she ducked, slapped the crap out of him, and slung him as far as she could. It felt good actually displacing a bit of her anger at Tarthon’s leaving of her on the idiotic grunt.

She finally looked to see who she had rescued and immediately her eyes rolled. Thor, son of Odin, was staring right back at her, a grimace on his face.

She shook her head. She didn’t have time for this today. Throwing a neutralizer on his neck she instantly zapped him and he could do nothing but fall unconscious. Walking over to his sleeping form a small smile came to her face.

This day had gone from crappy to actually kind of interesting. She could see it in her head. Thor vs. The Incredible Hulk. Oh, she was about to get paid.