I’ve been trying to update my list of Best Picture winners which has led me to Ben-Hur, the film that stars Charlton Heston (the only movie he would gain a nomination and Oscar for Best Actor) and would go on to win eleven! Oscars and deservedly so. (The only other movies to earn eleven Oscars have been Titanic and The Lord of the Rings: Return of the King.)

The film is SUPER long at a whopping three hours and forty-three minutes and boy did it capture me and never let go. I was truly expecting this film to be a bore. Imagine my surprise when it was the exact opposite.

With great special effects for 1959 and sweepingly epic scenes like the absolutely riveting chariot race, my adoration of this film grew to insurmountable heights, but at the heart of this story of revenge lied a powerful lesson of love and forgiveness. By the film’s conclusion, I was expectedly weeping profusely and gazing in awe at the beauty of the movie’s impactful storyline.

I’ve seen The Ten Commandments and Planet of the Apes, the other two films Charlton Heston are known for, but this is undoubtedly his best film and definitely one of the best movies that I’ve seen.

Not to mention, I couldn’t help noticing the similarities it had to Gladiator, the comparably powerful story that deals with the Roman empire and revenge, but I also managed to notice some ties to Star Wars as well. 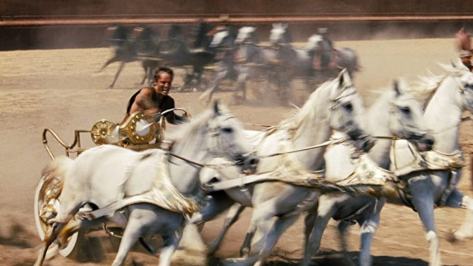 The chariot race is the most striking parallel and I couldn’t help feeling like Sebulba’s pod racer was fashioned off of Messala’s ruthless chariot design. In fact, the pod race is almost identical in dramatic style to the chariot race in every way. However, I have to say, Ben-Hur‘s chariot race was far more heart-poundingly brilliant than the pod race in my opinion.

There is also an intimate moment between Ben-Hur and his pretty lady friend, Esther, and as they spoke it I noticed striking parallels to Attack of the Clones and Revenge of the Sith. Parallels that I will share in a different post.

All in all, Ben-Hur is a movie I will never forget and I will probably watch it again sooner rather than later. I’m giving this film 5 out of 5 stars and 100 out of 100.