So, I just recently watched Guardians of the Galaxy Vol. 2 (a.k.a GOTG Vol. 2) and I was skeptical. I had heard a lot of reviews and not a lot of them were good. A lot of people said that it was decent but not nearly as good as the first one was. And then there was a choice few who said it was pretty entertaining. So when I watched it for the first time I didn’t know what to expect.

I had already had a bad impression because of all of the advertising for the movie. It was like everywhere I looked there was GOTG…and this was months before the movie was even supposed to come out. A lot of times when movies are advertising heavily way before the movie comes out (like Batman vs. Superman) the movie usually isn’t good. So that was already a red alert. And then the content they did show wasn’t that great looking. The first GOTG had me interested from the very teaser that long time ago at the end of 2013. This one…not so much.

So the movie started and I was just hoping it wouldn’t be as bad as Ant-Man because that was a pretty corny Marvel film. (I actually like Ant-Man nowadays which is hilarious.) And then the movie ended. And then the very next day I watched it again because there was so much going on I just had to make sure I got all of the itty-bitty details. And now I’m here, writing this post, and I hope you enjoy. 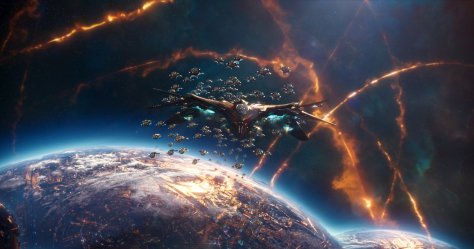 Okay, so I loved that they started the movie by showing Peter’s Dad and Mom with the song, “Brandy” playing through the scene. It was the perfect way to come into the movie. And then it jumps 34 years later and who do we see, “The frickin’ Guardians of the Galaxy.” It’s been such a while since the last one came out that it was nice to see the bunch arguing about nonsense, as usual, before that tentacled beast came roaring out of a rift in space. And then Baby Groot (by the way, Baby Groot is BEYOND adorable, oh my goodness) turned on the music and GOTG Vol. 2 started. That was my favorite part of the movie because it was so hilarious and cute and colorful and the song was great. Watching Baby Groot dancing around while everyone was fighting for their lives against that monster cracked me up big time.

And then after that, the story really began. I liked how Peter’s dad came into the movie. It didn’t seem out of place or rushed. I was surprised at how early he came into the film though. And then the Guardians parted ways and that’s where the story also went into two directions. On one side you have Star-Lord, Gamora, Drax and Mantis whose story is very, very engaging. And then you’ve got Rocket, Baby Groot, eventually Yondu, and Nebula on the other side whose story is super boring.

With Star-Lord and company, I was riveted. Peter was a demi-god which was mind-blowing because that put him in a league with the likes of characters like Thor and Loki. I was loving the father/son relationship that was happening. It was great. Drax and Mantis began to create a cute friendship that was really fun to watch. And then you’ve got the awkward romantic thing going on with Peter and Gamora on the planet as well. I mean, the movie was good when it came to their side of the story.

And then you’ve got Rocket, Baby Groot, etc. and their story I didn’t like too much. I didn’t like Taserface. I felt that he was a dumb character that didn’t really need to be in the movie. Baby Groot searching for Yondu’s fin was a little overkill. I was like, “Okay! We get the message. Baby Groot can’t distinguish objects because he’s a baby. We got it!” It just took way too long. The jokes weren’t that funny. The music was okay. All in all, I was relieved when they escaped and started heading for Ego.

Then the movie took a turn for the better with the realization that Ego, Peter’s dad, was the real villain of the entire movie. I was flabbergasted, and disgusted, and horrified at what his plans for the universe were and what he had done to try to accomplish that vision. Seeing all of those bones of the children he had bred to be his right-hand man in that cavern was nightmarish. But then when I found out that Ego gave Peter’s mom cancer, that he was the one who killed her I was shocked. That was a really big surprise I didn’t see coming.

It gave the movie the boost it needed. The next forty or so minutes of the film were fun to watch. The humor was there, there was plenty of action, Mantis’s powers were cool to observe, and Ego was the ultimate Dusche bag. And, thanks to spoilers I had accidentally stumbled upon while reading a magazine, I knew Yondu was going to die but it still made me tear up a bit when he did. Peter’s farewell speech felt very heartfelt and it definitely tugged at my emotions. And then when Gamora and Nebula made peace between each other and hugged, that was also an emotional moment that nearly made me cry.

Was the story as good as the first one? I’d have to say it was better. The only thing is the first GOTG was executed flawlessly whereas this one wasn’t. I was glad to see that there were surprises in the film despite all of the commercials and that the movie wasn’t as bad as I’d thought it would be.

First of all…I. LOVE. MANTIS! She has literally become one of my favorite characters in Marvel right now. She’s funny, weird, sweet, and her powers are pretty impressive. I’m so glad she’s a part of the GOTG.

Star-Lord was great, as expected. He was hilarious, he was a demi-god…for a little while, and his story in the film was very fun to watch.

I have to say Gamora was a little underwhelming. In the first GOTG, she wasn’t just the love interest. She had a story, she had a purpose, and she could kick your butt with or without a weapon. In this one, she seemed to be very Peter-centric, at least during the second half of the movie after they danced. She was never the same after that. Gone was the cool assassin who betrayed Thanos for the greater good. She instead became the woman who was infatuated with the man she suddenly realized she loved. I like Gamora but she didn’t float my boat as much as last time I saw her.

Nebula was cool, as always. Her story was interesting and I loved that she turned good. She was too cool a character to be the villain all of the time. I can’t wait to see her come face to face with Thanos now that her mission is to kill him.

Drax was better in this movie than the last. In the first one, I couldn’t stand Drax. He was too odd. I mean it took me forever to figure out what his name was, that’s how much I didn’t like him. He was definitely more tolerable in this film.

Yondu was alright. I’ve never liked Yondu that much so even though it was sad to see him die I won’t miss him in the slightest.

And then finally, Rocket and Baby Groot. They are the CGI characters in this movie and unfortunately, you can tell. Rocket was fun, as always, but he looked weird this time around. In the first GOTG, they did such a great job he almost looked real. In this film, hmm, not so much. At one point he’s face to face with a snarling, real Yondu and he looks very fake. It’s kind of a shame. And Baby Groot also doesn’t look that tangible but what he loses in realism is over shadowed by his superior cuteness. He’s so adorable that I can barely handle it. I was not anticipating him to be that cute in the movie. Can I please have a little Baby Groot? 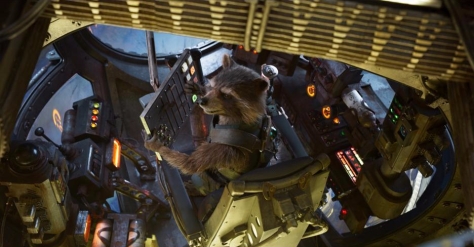 I loved, loved, loved the music in GOTG Vol. 2. The songs were definitely better than in the first one. I loved the song at the beginning that Groot was dancing to and I loved “Wham Bam.” The other songs were just as good but those happened to be my favorite. I’m can’t wait to see what the new playlist might be the next GOTG.

Ayesha was an okay villain. She didn’t really ooze menace or any sort of threatening atmosphere. And Ego was just a planet-sized jerk. They have, unfortunately, joined the long list of lackluster villains in the Marvel Cinematic Universe. I will say though, they’re better than Ronin for sure.

My Conclusion of the Movie

Was this movie better than the first one? In ways…yes. The music was better, the story was better, the characters were more developed, but this is where GOTG Vol. 2 goes wrong.

This movie felt very CGI-centric compared to the other one. The locations, for some reason, felt more realistic to me in the first one than this one. Even the fights, such as the final one between Star-Lord and his dad, Ego felt like CGI bombs. I just knew there was a green screen in nearly every take.

Secondly, there wasn’t enough location hopping for me. (I mean you could say Rocket, Baby Groot, Yondu, and I think his name is Kraglin jumped to 700 different planets but that doesn’t count.) In GOTG there were all sorts of different worlds whereas this film revolved around Ego’s planet for nearly the entire movie. That’s like having a Star Wars film centered around a single planet the whole time. That would be boring.

And the humor sometimes felt a little forced to me. Some things were really funny (like Star-Lord and Rocket fighting for control over the Milano) and then other jokes were not (like Nebula, after shooting Yondu’s fin, saying that fruit she ate wasn’t ripe.) And was it just me or did it feel like there was a lot of excessive hollering in this movie?

The good did outweigh the bad though. I loved the vibrant beauty of the movie. That’s in fact what I enjoyed the most. I liked the romantic plot between Star-Lord and Gamora. It’s the most authentic love story between two characters in Marvel since Tony Stark and Pepper Potts. I enjoyed the introduction of new characters. The story was engaging and felt important to the timeline of all of these Marvel films. And I love, loved the credits. It’s rare to have credits that engage you throughout the entire time but they did with all of the end-credit scenes and the silly pictures and words. This movie had the potential to be better than GOTG but it just wasn’t executed as perfectly.

(Present Day: It’s a shame because three years after watching the film for the first two times I find this movie pretty repulsive compared to Guardians of the Galaxy. I wish I could go back to the days when I actually enjoyed this movie but nowadays, I only watch it for the visual feast it provides…nothing more. And no, the songs are definitely not better.)

I thank you for reading my post and I hope you have a beautiful day.

2 thoughts on “Movie Review Flashback: My Review of ‘Guardians of the Galaxy Vol. 2’”