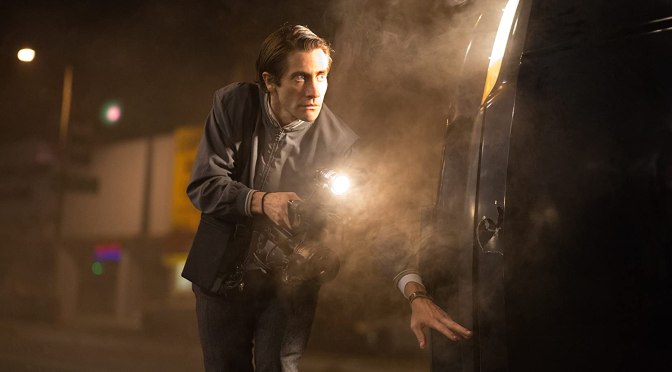 I’ve been hearing about this Nightcrawler movie for quite a while now. After watching Prisoners, which was another film that starred Jake Gyllenhaal, I found myself really intrigued to watch this movie. My impression, due to the film’s poster, was that Gyllenhaal’s character was some creepy guy who goes around killing people. I was way off.

Instead he is what is called a “Nightcrawler”; an individual who goes to crime scenes and films those scenes before selling the gruesome footage to news channels for a good sum of cash. And that’s all the movie was about.

A young psychopath who transitions from being an unemployed thief who will kill you if you happen to have a nice watch to becoming a nightcrawler entrepreneur.

I have now seen Gyllenhaal in four different roles.

He’s been Dastan, a hunky game character who conveniently acquires the affection of the beautiful prince and defeats the bad guys with heroic precision in Prince of Persia: Sands of Time. He’s Detective Loki in Denis Villeneuve’s horrifying mystery-thriller, Prisoners, where he delivers a performance that I deem to be the most fascinating cop-detective portrayal since Tommy Lee Jones’ Samuel Gerard in The Fugitive. (Gyllenhaal should’ve gotten an Oscar nomination for Prisoners.) And then there is most likely his most popular role as Mysterio in Spider-Man: Far from Home where he plays a devious villain dressed like a cross between Doctor Strange and Iron Man and wielding fake green laser beams who’s looking for a bit of revenge against Tony Stark.

However, it is his role as Louis Bloom in Nightcrawler that is his most striking to date.

With a skinny frame and bugged out blue eyes, he scuttles around the film like some sort of nighttime ghoul with a camera in hand as he films murder scenes without seeming to be truly haunted by the gruesome deaths he is witnessing. With each crime that takes place he delves deeper and deeper into this dark world of nightcrawling, finding a purpose in the insanity of such a terrible practice.

But forget about the fact that he looks creepy, he’s got a super-creepy nighttime occupation, or the fact that his devilish smile gives me the heebie-jeebies, it is his relationship with news anchor, Nina Romina (Rene Russo) that is the most terrifying of all the scenarios.

Writer/director Dan Gilroy paints a grim picture on just how ruthless a man can be in business and how so many men dominate women on a daily basis. Lou Bloom starts out as a simple youngster with grim crime scene footage to sell to a news station. Nina Romina, a heartless woman who wants the biggest, most gruesome scoops to bring the news station she works for back to the top of the morning viewers ratings, is willing to put any video on the news, no matter how graphic it is.

Lou Bloom is an exceptional nightcrawler and as he films more and more videos he makes more and more money and he begins to demand stuff. He demands he and Nina be in an off-and-on sexual relationship so that he can have dominion over her essentially and because she’s desperate for his ultra-grim content she relents. He demands and demands and she relents and relents until by the end of the movie, when he trails off on a list of wants as he slowly walks toward her with a sort of violent menace, you can’t help watching the scene with a sense of unbridled anger/horror.

He is the king by the conclusion of the story. And what a dark story it was. It’s a film unlike any other I’ve seen and yeah, I found it quite disturbing.

Despite all of this I ended up giving it 7/10 stars on IMDb because I slept through half of the film. Its plot points were easy to decipher, its story was a bit of a slow-burn type of thing, and by the end, I found myself wondering why I even bothered to watch this movie.

So no, Nightcrawlker, in my opinion, is not a must-watch, but it is a rather intuitive piece to show who you how to build a character over the course of a movie in concise fashion.