T-38 rushed to Qi’ra’s side, her eyes wide as she beheld her boss. Her skin was getting paler, her breaths were heavy, and she seemed barely on the cusp of consciousness. She hurriedly picked Qi’ra up and took her into the bedroom. As she lied her on the bed Qi’ra grabbed her arm.

“He left,” T-38 told her bluntly. “Now stay here. I need to find out what’s wrong with you.” END_OF_DOCUMENT_TOKEN_TO_BE_REPLACED

My mother has been talking about Lost in Translation for a while now and how good a movie it is. I finally saw it the other day and yeah, it is a great film.

Sofia Coppola, who wrote and directed the film, won an Oscar for Best Original Screenplay and deservedly so. This movie is a beautiful story of two people who find themselves rethinking their lives in Tokyo, Japan who just so happen to run into each other and form a beautiful friendship. These two characters being Scarlett Johansson’s Charlotte and Bill Murray’s Bob Harris.

Charlotte is a young woman who is questioning her two-year-old marriage with a young photographer whose investment in her seems like a second thought. And Bob Harris is a faded actor who’s in Japan trying to sell advertising for a whiskey company. His twenty-five-year long marriage is getting a bit stale, he’s slightly annoyed with his wife who seems to barely have time to talk with him across seas.

Charlotte and Bob’s relationship in this movie is a beautiful twist on the idea of two people having an affair. Even though they’re married and even though their feelings for one another can be seen as slightly sexual, Coppola writes them in a way where they feel cemented as good friends, not sexual partners. And I appreciated that!

END_OF_DOCUMENT_TOKEN_TO_BE_REPLACED 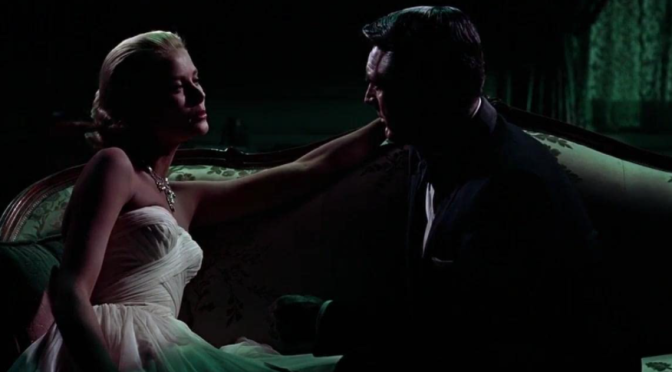 Alfred Hitchcock is an amazing movie maker, clearly, and I love all of his movies…however, To Catch a Thief was actually kind of boring. Straying away from the riveting murders and thrilling plot points, To Catch a Thief is more of a romantic endeavor featuring a match made in Hollywood heaven with graceful Grace Kelly and “handsome” Cary Grant playing the two romantic leads.

The movie’s best scene was the one between Grant’s John and Kelly’s Frances during their nighttime date in her apartment. The cinematography was beautiful in that scene, the cat-and-mouse sexual tension between the two characters was at an all-time high, and the nice playback between the characters’ moment of passion and the fireworks display outside was a nice touch.

However, I ultimately fell asleep on the last thirty minutes of the movie, waking up just in time to see the conclusion of the film. The film’s plot–A retired jewel thief sets out to prove his innocence after being suspected of returning to his former occupation–never delivered any moments that were that interesting.