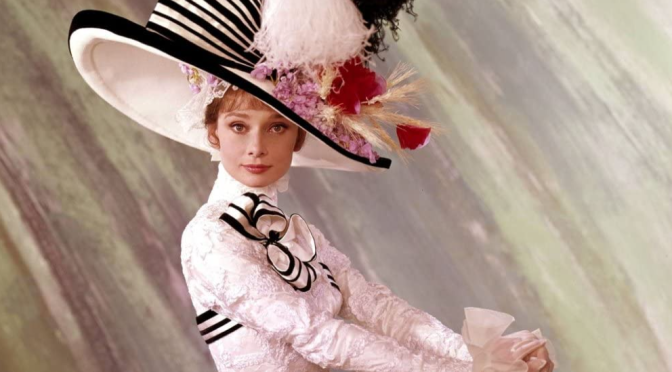 I love musicals. Musicals can be so cheery, depressing, lovely, magical, oh they can bring out all of my emotions and now I’ve watched another iconic musical; My Fair Lady.

I finally watched My Fair Lady, another one of the few musicals that has garnered a Best picture, and there were things that I really liked about the film, mainly Rex Harrison’s Oscar-winning performance as Professor Henry Higgins who I thought was hilarious. He was unlike any character I’ve seen in any other movie and he’s the most memorable thing about the film undoubtedly. If anything, I’m glad I watched the movie for him alone.

I also really appreciated the costume designs. The flamboyance and elaborate styles of the English elite was utterly enthralling, specifically the scene where Higgins takes Eliza Dolittle to the races. Wow, were those dresses worn by all of those fancy ladies utterly breathtaking.

I found myself seeing the very apparent inspiration for the style of the characters in the Canto Bight sequences for The Last Jedi. Mmm-hmm, I see you Rian Johnson.

Besides that, and the charming lad named Freddy whose single musical number was enchanting in its simplicity as he dominated the screen for what little time he head, I found the film to be rather underwhelming.

The musical numbers, beside’s Freddy’s “On the Street Where You Live” and all of Higgins’ hilariously spoken numbers that featured his hilarious rants, were rather blah. None of them left me covered in goosebumps like the numbers from The Sound of Music or The American in Paris and that’s ultimately what makes a musical so great. If the musical numbers aren’t engaging the musical ultimately becomes underwhelming.

I thank you for reading and I hope you have a fabulous day.