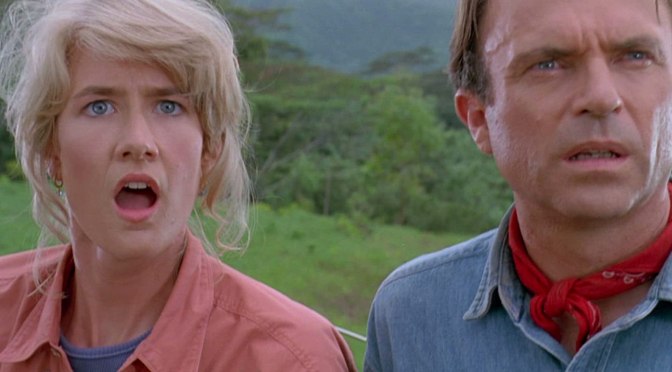 Since the 70s’ Steven Spielberg let the world know…he could make movies. So many of his films are iconic, so many of his stories have helped inspire movies to this day, and I, as a movie lover, am always taken aback by how he manages to craft that on-the-edge-of-your-seat level of suspense in his films.

I’ve seen so many of his movies; Saving Private Ryan, The Color Purple, War of the Worlds, Close Encounters of the Third Kind, Hook, etc. but there are three movies of his that are 100% great.

Raiders of the Lost Ark

You want to know the perfect action flick? I’m talking an action movie whose first second to the last delivers thrills, laughs, and chill-inducing moments that you’ll never forget. That is Raiders of the Lost Ark!

Harrison Ford takes a whip-wielding archaeologist and turns him into a movie icon as Steven Spielberg takes us on a worldwide adventure that never lets up.

Iconic isn’t even enough to fully describe the majesty of this action movie. There’s a giant ball that’ll crush you and your bones, plenty of creepy Nazis, a grand score that’ll leave your heart soaring as it imbues each scene with majesty, snakes, a fly (you know the one), and well, the power of God.

No movie has been able to replicate what seems like an easy concept but has been proven to be almost impossible to remake. Even the two Indiana Jones films that followed could live up to the standards of this Best Picture-nominated wonder.

In terms of my favorite scene from the movie: it’s literally the last one when we see the Man With No Name taking the Ark of the Covenant away. It’s the perfectly mysterious conclusion to a film that is, well, perfection.

Shark meets a horror film? Yeah, sharks are pretty terrifying fish but it wasn’t until this masterpiece of a movie that sharks became a household nightmare of the ocean.

Steven Spielberg sparked fear in the hearts of millions with a giant (but not too giant) Great White hungry for the taste of humans. Roy Schneider plays the everyman police chief whose only goal is to keep the townsfolk safe and from there Spielberg takes the viewer on a fascinating journey that is utterly terrifying at times.

He drives up the suspense and then tricks viewers into thinking the movie is a docile adventure with John Williams’ twinkling score. But then every few scenes or so the shark shows up again and makes things worse and worse until that iconic conclusion that is straight-up edge-of-your-seat terror. It’s utterly impeccable moviemaking and its last-minute is some of the finest in cinema history.

My favorite scene from this movie is actually a really quiet one. It’s the scene when Quint tells Brody and Hooper the horror story of his time in the service and his encounter with sharks. That silent sequence is pure movie magic as it casts a spell on the viewer and ever since the first time I saw it I was spellbound.

A movie filled with dinosaurs? What could go wrong? Um..everything! And yet Spielberg managed to take this out-there concept and turn it into an iconic moment in cinematic history.

Its next-level visual effects are still mind-blowing and even though it takes a little while for the movie to finally pick up steam once it does it never lets go.

The music is out of this world and the attention to every detail is phenomenal. I watched this movie for the first time in IMAX eight years ago and it was one of the most amazing experiences I’ve ever had. I have never shrieked so much watching a film in my life. It was stunning and like Indiana Jones, none of its sequels could ever quite live up to this one.

My favorite scene is undoubtedly the one when we see the Brachiosaurs for the first time. It’s a quiet moment made more perfect by John William’s score that makes the scene so magical I will always be wowed by it.

These three movies are some of the finest in cinema; true testaments to the art of movie-making. If you’ve never seen these films please give them a look because they. Are. WORTH IT!

What’s your favorite Spielberg movie (or movies?) Feel free to share your thoughts in the comments below.