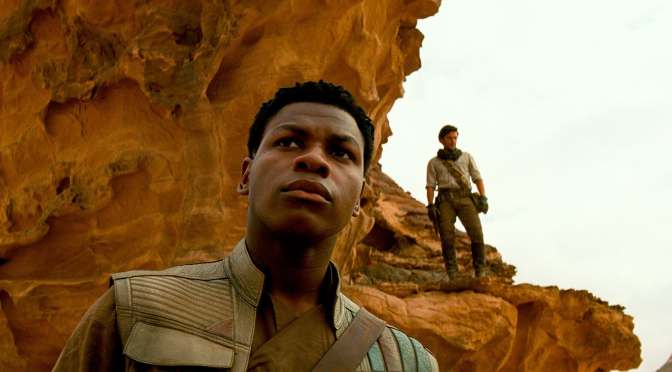 As I watched The Last Jedi I noticed the main reason why Finn feels so starkly different in The Rise of Skywalker. In fact, it’s very clear.

Why was Finn such a compelling character in The Force Awakens? Because he was a stormtrooper. It was that simple fact that made him one of the most enduring and unique characters in the franchise. I loved Finn’s story and I was excited to see his arc in the Sequel trilogy.

Even though Rian Johnson left the idea of Finn being Force-sensitive on the back burner one thing he didn’t lose for Finn’s story was the idea that yes, he was a stormtrooper and that deserting the First Order hadn’t suddenly made him a superhero. In fact, he was still very scared at the beginning of the film and his only real reason for staying with the Resistance was so he could wait for Rey and then hopefully jump ship with her.

It was only during the side mission with Rose Tico did he begin to understand what it meant to others being a part of the Resistance and by the end of the film he’s now ready to do anything, even lay down his life, for his friends as a soldier of the Resistance rather than run away.

It was a beautiful evolution in his story and I just knew it was going to end perfectly.

Instead, J.J Abrams forgot this fascinating thread, instead choosing to force a burgeoning Force-sensitive Finn down our throats instead of focusing on his role as a former stormtrooper-turned-Resistance-big-deal for the majority of the movie.

They tried to do that with Jannah being a former stormtrooper as well but Abrams didn’t choose to focus enough on the fact that these were two former troopers fighting back against their oppressors. Instead, he made us forget that emotionally stirring storyline by making us focus on the idea of Finn being Force-sensitive which didn’t feel warranted. It instead felt like another course correct to make fans who hated The Last Jedi happy.

I love Star Wars. I love this franchise’s characters. And boy do I hate the fact that The Rise of Skywalker seemed to totally dismantle a story that I’ve cherished for decades.

Rey is powerful for no reason other than it’s necessary to end the story with the heroes winning, Kylo Ren is a creep who gets a smooch before he dies because they just couldn’t let Ren and Rey not kiss in this trilogy, Poe is annoying and I don’t even know why (oh, and now he’s the Star Wars equivalent of a drug dealer…great…), Finn is now practically a Jedi, Rose is reduced to a nothing role like Jar Jar Binks (she is NOT as annoying as Jar Jar Binks people!) and Palpatine is suddenly the stupidest villain in Star Wars because he told Rey his entire master plan.

And don’t get me started on the forgettable new characters, namely Zorri Bliss who’s just thrust into this story to have a ten-second romance with Poe to make people think he’s not interested romantically in Finn. (Yeah, right.)

Oh, and how they treat C-3PO in this movie is beyond upsetting. Yes, he can be comic relief in The Empire Strikes Back but the characters in The Rise of Skywalker literally treat him badly. It’s as if no one even seems to like him but they only tolerate his existence because he’s the translator. I mean, Poe literally calls him a “metal a**” at one point. Not even Han Solo called him that! It’s terrible!

I think the only characters who were left unscathed was Lando and Leia. And the Millennium Falcon. Lol.

Excuse the rant. When I think about The Rise of Skywalker and how it destroyed something that had been so much fun to watch…I’m just glad The Mandalorian exists because honestly, I would be done with Star Wars right now.