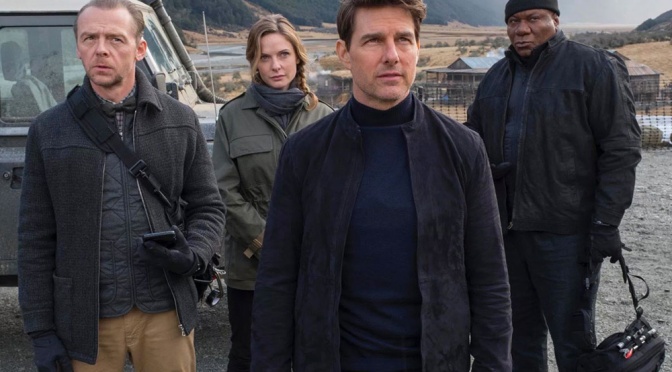 If you’ve read my blog recently you will know that Mission: Impossible-Fallout was my favorite film of 2018 and for good reason. Yes, there were fantastic films like Black Panther and Avengers: Infinity War, Solo: A Star Wars Story and A Quiet Place, but this latest Misson: Impossible movie stood out among its great-movie-brethren because it was, in a word, amazing. From beginning to end this movie sends its viewers on a rollercoaster ride unlike any other with twists and turns, dips and dives, and by the film’s conclusion it leaves you breathless but wanting more.

After obtaining it on Blu-Ray I had a fetish for the film, watching it over and over again because I just couldn’t get enough. I even revisited the two films before it–Ghost Protocol and Rogue Nation–because I was enjoying the franchise so much. Then I got tired and stopped watching it for a little while…until last night.

I was bored, I needed a good movie to watch, and as I rummaged through films on Hulu there was nothing that looked appealing. Bing, goes the lightbulb above my head. I’ll watch Mission: Impossible-Fallout, I say to myself. And I did. And yet again I was blown away.

I know I’ve said it time and time again but this movie is perfect. It really is. Why is it perfect you may ask? Well, I’ll give a quick rundown on the reason why this is clearly one of the best action films of all time.

When I think of a good action movie there are a few that instantly come to mind; Speed, Die Hard, Last Action Hero, The Fugitive, etc. All of these films are spectacularly riveting in the action department and are easily some of my favorite movies of all time but even these movies have a limit on the action sequences. Not Fallout. These are literally all of the action sequences in Fallout.

By the end of all of that, the brain is exhausted…in a good way. But what makes this movie all the more gripping is that not only does it contain fourteen! riveting action sequences but the dialogue scenes between the action is just as intense. This movie is 2 and 27 minutes long and I feel every last one of those minutes as the movie’s intensity stretches on and on without stopping. I love it!

Another reason why this is one of the greatest action movies ever made is that it manages to incorporate subtle romance into the film in such a perfect way.

We see the continuing narrative of Ethan Hunt’s relationship with British agent Ilsa Faust evolve as their romantic feelings for one another blossom even more. But the thing I love about their relationship is how equal they are to one another. Ilsa Faust isn’t a damsel in distress. She like, Ethan Hunt, is a capable spy who can do incredible things. Both have been dragged through the wringer numerous times and both understand how hard it is to be what they are.

You see, most action films’ romances feel forced or out of place but Fallout does it just right because it’s a continuing storyline introduced in the previous film.

And the final reason why this movie is so outstanding is the music. A movie can be somewhat enjoyable but if the score is awful the film is going to leave a bad taste in your mouth. I mean, why do so many people love Star Wars? It’s not just because the movies are awesome. It’s also because of John Williams’ accompanying brilliance that Star Wars is able to shine.

Mission: Impossible-Fallout has one of the greatest scores I have ever heard. It almost feels like a character of its own. Composer Lorne Balfe manages to tell the story just as well as the movie. That’s why, on the Blu-Ray, there is a Score-Only feature where you can literally watch the film with no sound other than the music.

Okay, maybe this will be the last time I write about how great Mission: Impossible-Fallout is. Maybe I won’t. Whatever the case, I love this movie dearly and I can’t wait to see how the next two Mission: Impossible films find a way to up the stakes and the action because at the moment it seems almost, well, impossible to do so.