It’s Juneteenth and to celebrate this incredible day in American history here’s a look at my favorite female superhero via fan art; Storm. Enjoy!

This is awesome, pure, and simple. I love the rings. I love the rock and roll look. Clearly, Storm is incredible in every decade.

END_OF_DOCUMENT_TOKEN_TO_BE_REPLACED

Remember when Black Panther came out last February? Remember how it broke records left and right and became an instant cultural phenomenon? And remember when it, just a few weeks, was surprisingly nominated for Best Picture for the Golden Globes? Well, this Black Panther train ride hasn’t ended yet because it just got seven nominations, including the most prestigious nomination every filmmaker could ever dream of; a nomination for Best Picture.

I waited and waited, growing more and more surprised at all of the nominations the film was receiving, but when it was announced that Black Panther was indeed one of the eight films nominated for the grandest movie award in Hollywood I was downright thrilled.

Yes, there will be those that say Black Panther doesn’t deserve the nomination. And yeah, even I’m a bit surprised considering that clearly, my favorite superhero film is The Dark Knight which I think–even eight years after its release–is still better than Black Panther. But the reason why Black Panther was nominated was that it was something we’ve never seen before that impacted not just the inhabitants of the United States but the world.

We got to see black women portrayed as powerful, smart, independent, kind, and naturally beautiful which is something that has never really been portrayed in cinema. 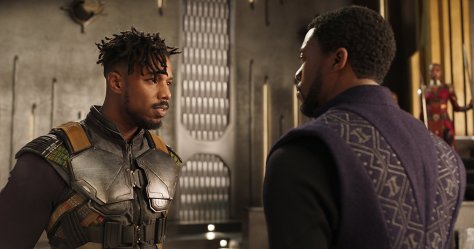 And we got to see black men with so many different facets. They were villainous and triumphant, benevolent and cruel, powerful and weak. These were fascinating characters with depth, something you don’t often see with characters of color.

Black Panther may not be your favorite superhero or mine but it is powerful and it’s that power that has allowed it to receive such praise and accolades in Hollywood.

Are you excited about this news? Feel free to share your thoughts in the comments below.

Black Panther was the first film in the MCU to have a movie soundtrack made for the movie by a current artist and that artist was Kendrick Lamar. His movie soundtrack is easily one of the best I’ve heard for a film but the song that goes along with the end-credits (“All the Stars”) has a music video and I’ve just recently seen it. Oh my goodness! It was utterly incredible to behold. If you’re interested, here it is.

Black Panther was already a remarkable depiction of strong, beautiful black people but this music video hones that narrative and takes it to the next level of mindblowing awesomeness.

The artistic factor to the video is riveting and easily one of the most incredible things I’ve ever seen (especially in a music video.) And I love that this video paid homage to Black Panther by showing women as matriarchs.

I already loved the song at the end of Black Panther but now I love it even more after seeing this video.

I thank you for reading and I hope you have a beautiful day. Wakanda forever!

Valkyrie became one of my favorite heroines following her debut in Thor: Ragnarok. She was spunky, tough, independent, and most importantly, she wasn’t treated as a love interest for Thor in the movie. There was some subtle flirting between Thor and her but the writers didn’t let their bond coalesce into a full-out love story. I appreciate that. So when Avengers: Infinity War came around I figured there would at least be a small cameo from her (which I was so excited about) but I couldn’t have been more wrong. There was no sight nor mention of her anywhere in the film and that leads me to my question: Where is Valkyrie?!

Valkyrie had a major role in Thor: Ragnarok and really placed her stamp on the movie. She was in the majority of the film which makes her one of the most important characters in the story and that means she should’ve at least been mentioned once or twice come time of Infinity War. That’s like if they hadn’t brought Wong into the movie. That wouldn’t have made any sense considering how close Wong is to Doctor Strange. So the only explanation that I can think of is that she was one of the Asgardians that Thanos didn’t kill.