News about the highly-anticipated Captain Marvel has been few and far apart but now (finally!) we have been given an extensive look from Entertainment Weekly at Marvel’s upcoming installment; Captain Marvel. So, with no further delay, here are all ten! exciting photos. Enjoy!

END_OF_DOCUMENT_TOKEN_TO_BE_REPLACED

The Marvel movies are done for the year and now we must look forward to the future. The next MCU film that is set to come out is Captain Marvel which is set to come out on March 8, 2019. No material has come out about the film yet which is a little strange considering that the movie is coming out in little over half a year but it seems that is coming to end.

Rumors have begun circling that the first look at Captain Marvel via trailer will be debuting sometime this month. That is so exciting!

I’m one of those people who have zero clue of who Captain Marvel is. I know she’s supposedly very powerful but beyond that I’m utterly clueless. And the synopsis for the film doesn’t help things. Here it is.

Carol Danvers becomes one of the universe’s most powerful heroes when Earth is caught in the middle of a galactic war between two alien races.

This sounds like quite an awesome origin story and I absolutely can’t wait to see what happens. The simple fact that it’s being kept so secret pretty much proves how incredible this movie is going to be.

So, if you were like me and you wondering when we’ll finally get to see some footage of the film wonder no further. It’s coming soon and I. Am. Ecstatic. I hope the trailer is worth the wait.

Over the years there has been a fascinating increase of female superheroes in the MCU. There has been such a rise of awesome heroines in this franchise in fact that Tessa Thompson, who plays the role of Valkyrie in Thor: Ragnarok, said that there should be an all-female Avengers movie. A group of actresses even went as far as to approach the top people in Marvel about the idea. So, should there be an Avengers movie that focuses on a team of only women? Um…yeah!

We’ve seen progress in how women are portrayed in superhero movies. Wonder Woman got her first solo film last year which featured not only the first female superhero to get her own movie but it had a female director at the helm as well. It ended up making just a little north of $800 million, proving that women could drive people to the movie theaters. This year Ant-Man and the Wasp was the first Marvel movie to feature a female hero in the title. And next year Marvel is going to feature their first film that focuses on a female hero’s origin story with Captain Marvel.

Why shouldn’t Marvel take things to the next level by introducing a movie featuring a group of heroes that consists of only women. One of the greatest moments in Infinity War was the awesome female team-up between Black Widow, Okoye, and Scarlet Witch. It gave a brief hint at what a female superhero group would look like and it’s pretty awesome. But who should be a part of this heroic team?

END_OF_DOCUMENT_TOKEN_TO_BE_REPLACED

Avengers: Infinity War had a lot of expectations. For years Marvel Studios had been building up a complex, interconnected field of movies that were all leading to one epic showdown; our heroes facing Thanos. Infinity War easily could’ve been an underwhelming experience and instead it met nearly all my expectations. Thanos was actually worth the six year wait, we got to see some great team ups between characters that otherwise would’ve probably never met, and we got an intense two and a half hour story that led to one of the most shocking cliffhangers that I’ve ever seen. Infinity War was so good it has raised a nearly impossible bar to surpass, financially wise and storywise, and yet it’s already been said from the cast and directors that the next film is going to wow us in even more unexpected ways. *chuckling* Really? Avengers 4 is going to be more surprising than Infinity War? Uh-oh, I’m nervous. But besides the shock factors what other elements will the movie need to surpass its predecessor. Well, that’s what I’m here to share with you. Enjoy!

END_OF_DOCUMENT_TOKEN_TO_BE_REPLACED 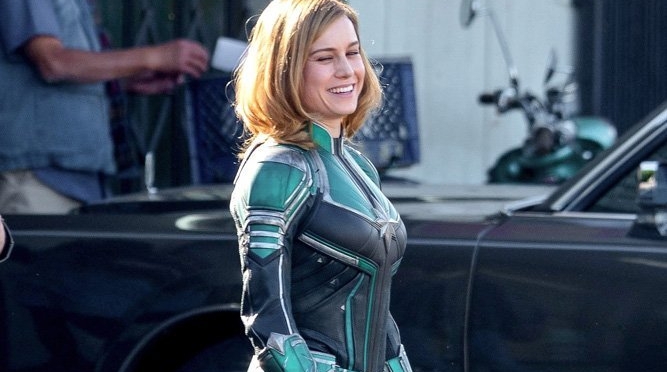 Captain Marvel is going to be the first female-led Marvel film and our first look at Brie Larson as the powerful superhero is here. Check it out.

So, here it is. I was definitely expecting the red and blue design but I’m digging this retro look. Is it the coolest suit I’ve ever seen? Not by a long shot but it is exciting seeing Brie Larson as Captain Marvel. I’m hoping her debut film is going to be enjoyable but we won’t know until a teaser is released for the movie.

I will say though, I’m glad the suit isn’t sexualized at all. There isn’t any skin showing or provocative tightness and that’s always awesome.

I’m happy to see this first glimpse at Captain Marvel and I hope this excited you as well. I thank you for reading and I hope you have a wonderful day.