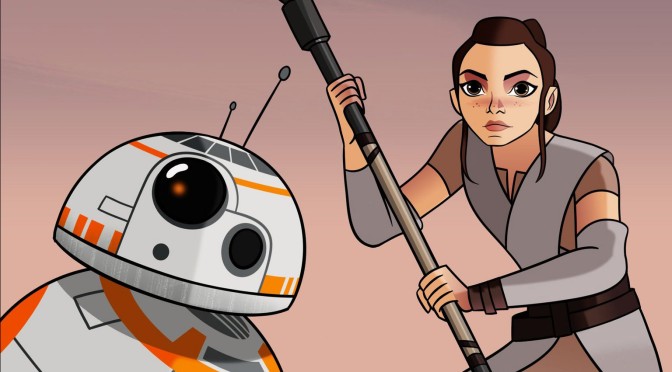 First of all Happy 4th of July! It’s a beautiful day for our country and what’s better on this glorious day than being introduced to something new with Star Wars? At the Star Wars Celebration in April they announced that there will be a special series focused on the heroines of Star Wars called Forces of Destiny. It would feature characters such as Rey, Jyn, Ahsoka Tano, and Princess Leia, and more. And what’s even better the actresses such as Daisy Ridley and Felicity Jones will reprise their roles as their characters.

Today I watched the first one that has been released which can be found on Youtube. It features Rey when she first met BB-8 and their tiny adventure. Take a look.

END_OF_DOCUMENT_TOKEN_TO_BE_REPLACED 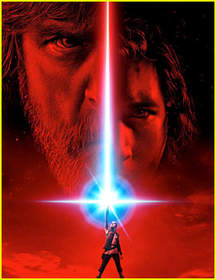 The Last Jedi is coming out later out this year and I am ecstatic! In April fans (like me) were finally shown a teaser for the highly anticipated film and was introduced to a brand new character, the small but mighty Rose. Ever since the Star Wars Celebration, there has been little news about The Last Jedi, even fewer spoilers, and a whole bunch of theories fans has tried to glean from the teaser. Then out of nowhere last Tuesday Vanity Fair let loose a fantastic spread for The Last Jedi and it blew my mind. There were exclusive photos, interesting interviews, and new characters to marvel over and theorize about. So on that note let me talk about some of my favorite moments from the awesome spread.

First of all the Covers 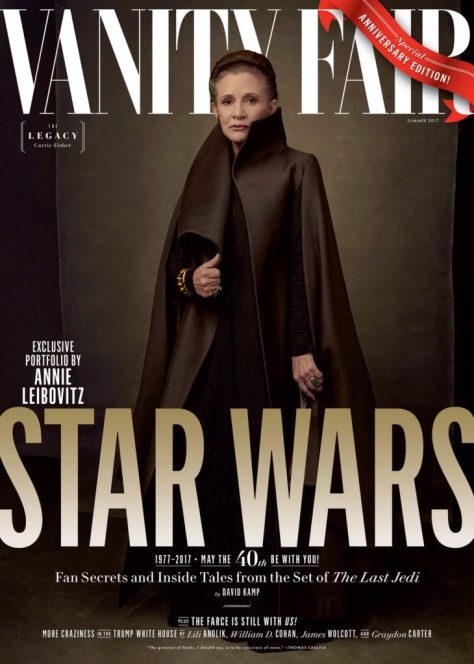 This happened to be my favorite cover. Leia is already a groundbreaking character because she wasn’t your typical princess. She was the woman who stood up to the menacing Darth Vader, talked junk about Grand Moff Tarkin’s odor problems, and told off her saviors because they didn’t have a perfect rescue operation. Yes, that’s Leia. And now she is the General of the Resistance and this cover embodies all of her strong, beautiful qualities. It slightly made me emotional when I saw it because, as we all know, she is no longer with us. She won’t be at any of the red carpet events, she won’t be able to say anything else that’s hilarious and genuine, she can only look down from above. R.I.P Carrie Fisher, we definitely miss you.

My second favorite was with Finn, Poe, and the newcomer Rose. 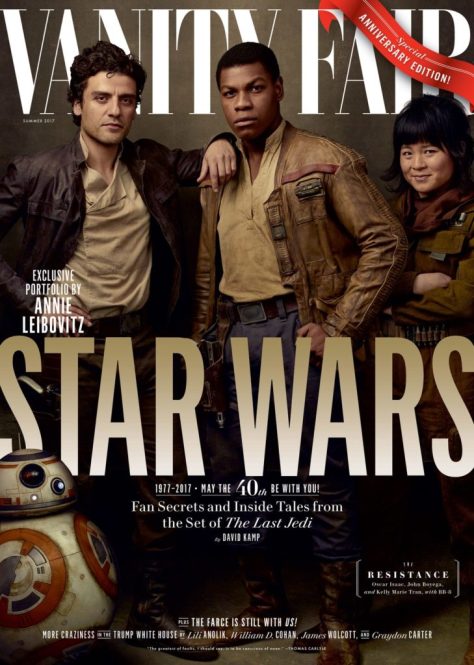 I don’t know why but this cover makes me so excited. Seeing Finn awake and well is already cool but his serious expression shows that he’s not going to be a joke in this next film. And the dashing Poe looks ready to blast a tie fighter right out of the sky with his incredible flying skills. Not only are they cool however but there’s Rose alongside them. I’m so excited to find out about her in the film and just exactly what her skill set is. I have a feeling she’s going to become one of my favorite characters in the Star Wars universe. And yes, it’s another strong female character! I’m loving Star Wars these days.

The other two covers are great too. The one with Kylo Ren, General Hux, and Captain Phasma is exciting. And don’t they just look mean? 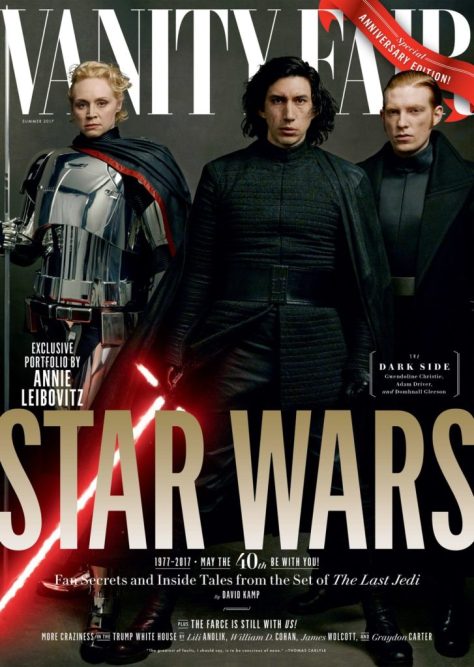 Rey and Luke’s cover was my least favorite simply because I’ve seen tons of pictures and moments with them on the island. It just didn’t excite me like the other ones have. It’s still awesome though. 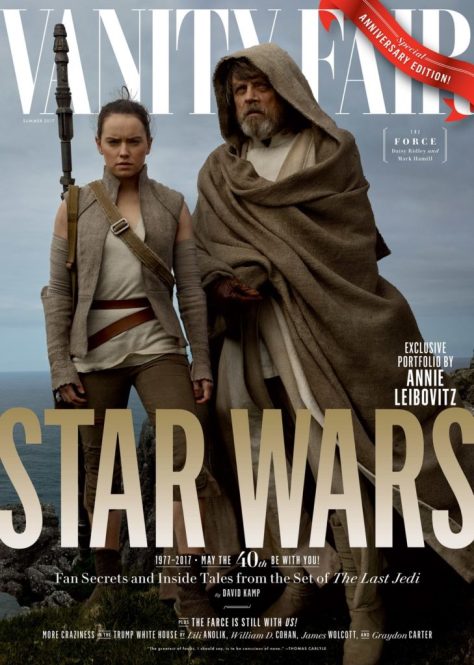 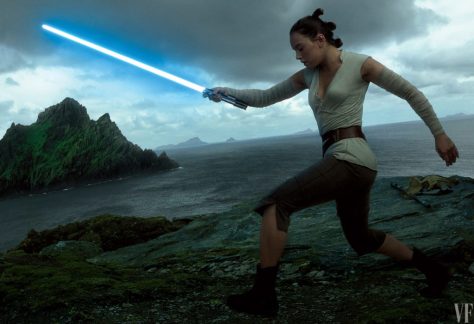 Now, this is an epic picture! Rey is already a wonderful character but this photo is incredible. The backdrop is so beautiful it looks like it could be CGI but it isn’t! And her with that lightsaber, oh I’m so ready for this movie. 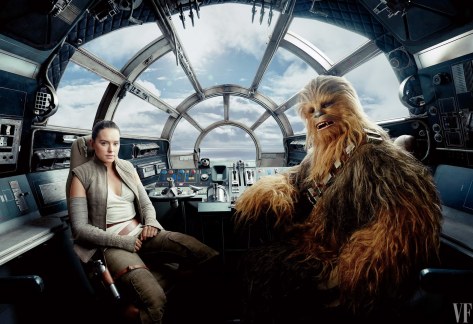 Yes, it’s another photo with Rey but it’s awesome. Her in the cockpit with Chewbacca is special because he no longer has Han to hang out with (that’s so sad) but he’s now with Rey. And that’s extra significant because Han told Rey Chewie liked her and now they’re buddies. I can’t wait to see how their relationship evolves in this next film. I mean isn’t this a beautiful picture? 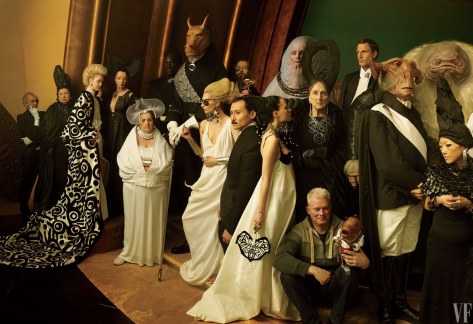 This, on a creativity level, is out of the roof. I have never seen anything like this in Star Wars, even from the prequels. Yeah, the prequels showcased a sort of fancy side of Star Wars with the city of Coruscant and the night scenes there but nothing compares to this. This looks like the most amazing environment I’ve ever seen in Star Wars. It’s part of the new casino planet Canto Bight and I just can’t wait to see everything in motion. I’m really loving Rian Johnson’s vision of Star Wars. In fact, it’s kind of amazing. 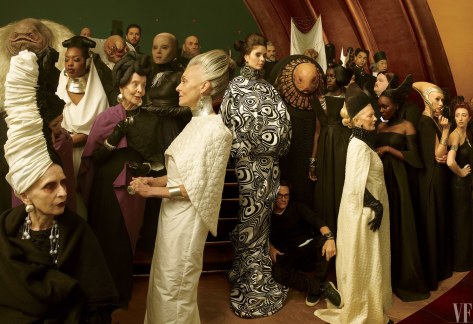 The hairstyles, the fancy black and white clothing, the aliens, it’s simply magnificent. 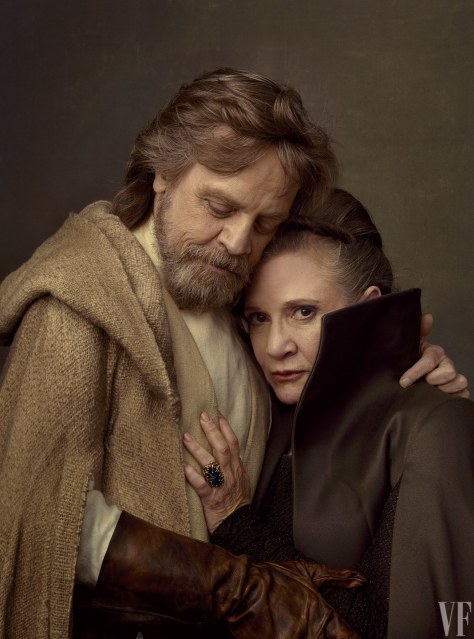 I like this picture because it’s Mark Hamill and Carrie Fisher together again. This is another one of those photos that made me emotional. At the time they took this picture they both had no idea that Carrie would be dead soon. It’s just such a beautiful picture. The magic they brought to this franchise was wonderful and I just can’t wait to see them in action again. I really hope they will reunite in the film one last time. I’ll probably shed a few tears when they do. 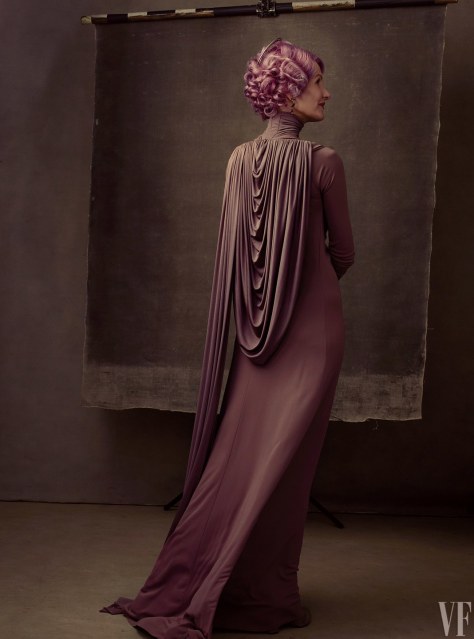 I love this picture because once again there’s a new character being introduced in this film and she looks awesome! This is Vice Admiral Holdo of the Resistance and her getup is spectacular. I already love Laura Dern from her performance on Jurassic Park. To know she’s going to be in Star Wars, a franchise I love dearly, can this movie get any more perfect? I’m excited to see what her character’s role will be in the movie.

There are many more pictures as well as plenty of interesting interviews on Vanity Fair’s website. These just happen to be my favorite. After these exclusive looks at the upcoming film, I’m very excited to see the first trailer for The Last Jedi. I think they’ll be debuting it at the D23 in July and if so I can’t wait. Until then I’ll just gawk over these pictures and try to put pieces of the movie together from the interviews.

Thank you for reading my post. It’s the first day of June which means we’re nearly halfway until it comes to theaters. Until then I’ll keep talking about the new trailers and updates about the film. Have a beautiful Thursday and May the Force Be With You! 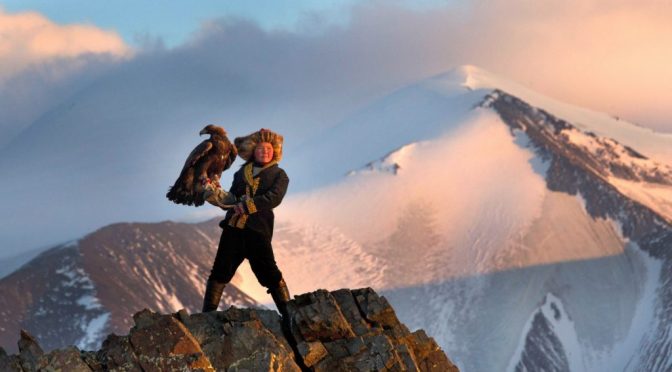 Why I Loved this Beautiful Documentary

This documentary, narrated by Daisy Ridley, follows the wonderful story of a teenage girl named Ahshopan who becomes the first eagle huntress in Mongolia.

We are introduced to her at a boarding school located in a small town miles from her home. It’s the last day of school for that week and she is taken home by her father on their cute moped. Her family are nomads that live in a simple circular hut in the midst of a vast barren plain edged with beautiful rocky mountains. Her family consists of a younger sister, younger brother, her mother, and her father.

Her father is one of the few remaining eagle hunters in Mongolia. For centuries Mongolian men found eagles and used them to hunt for food to support their families. Since she was a little girl she loved watching her father put on the eagle hunters’ garb and go out hunting. As she grew older her father allowed her to play with his eagle as he saw her interest in being a hunter.

She eventually gets a baby eaglet of her own and then her journey as a eagle huntress begins. This is a beautiful story that shows both her and her eagle’s growth as a team. She faces a little bit of adversity from the male elders who believe that women shouldn’t be eagle hunters but through sheer love of the role she doesn’t let anything sway her from what she wants to do. It was nice to see her father teach her in the ways of an eagle hunter.

One of my favorite parts of the film is when her father teaches her how to let an eagle land on her arm. That scene was powerful because most people (including me) would be mortally afraid to have a large bird like that fly full speed onto your arm. This fearless girl, however, was smiling the entire time and perfectly caught the eagle on her arm as if she had been doing it all her life.

The cinematography was gorgeous. The people who made this documentary filmed it on a low budget but they did such a fantastic job with their drones and cameras you would never know. They perfectly illustrated how expansive and untouched the land was. There’s one part where they’re filming in an area where there is nothing but fields of pristine snow and ice as far as the eye can see. The quiet peacefulness of that area could be felt through the screen.

The videographers perfectly followed the eagles as they flew at all sorts of different speeds. I loved watching the eagles flying over the ground so you could really see how fast they are going. At times they also put cameras on the eagle so you can see the world from the bird’s eyes. It was a very beautiful movie to watch.

I loved this documentary because there are many cultures throughout the world where men are dominant and they don’t let women or girls achieve their dreams. Ahshopan however stepped outside of the box of what Mongolian women are expected to do and did something extraordinary. It’s also beautiful because her father encouraged her to pursue being an eagle huntress rather than stop her. This shows that the world is slowly becoming more inclusive for everyone. I definitely think this is the perfect film to show young girls because it’s empowering. A girl might watch this documentary and want to do something that she thought she could never do until she saw the fearlessness of Ahshopan.

I give it a 93 out of 100 because it does end abruptly. I came away from the movie wanting to know a little more about Ahshopan’s end story but the movie was perfect besides that. There wasn’t much music but they did integrate some here and there, the cinematography was beautiful, and I am so glad to have witnessed another piece of history being written.

If you can’t see this documentary at any nearby indie movie theaters then I urge you to watch it when it’s available on the internet. You will not be disappointed. At the end of the movie you will have laughed, cried, cheered, and enjoyed the simple beauty of Ahshopan’s wonderful journey that, thanks to cameras, has been told.