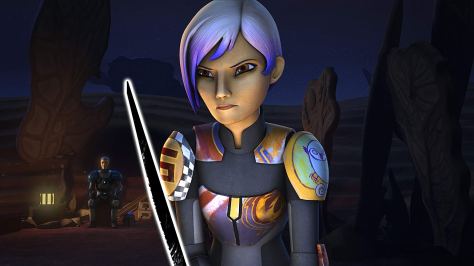 It was a fascinating approach to her character and indeed one of the best episodes in the series. Plus, the Darksaber lore was pretty fascinating too. END_OF_DOCUMENT_TOKEN_TO_BE_REPLACED

It took me two years to finally understand Star Wars: Resistance. Literally, I didn’t get what the series was fully about until Sunday evening when I watched the finale. And finally, it clicked.

This wasn’t a show designed to have a tragic ending or a bittersweet conclusion like Star Wars: Rebels. This was a story about a family of rebels who came together and survived a small but important conflict with the First Order in a small section of the galaxy. There were adventures, some perilous and some humorous. There were some interesting character developments, new allies, frenemies, and villains that were met along the way, and by the series’ conclusion, we get a sense of joy very reminiscent of the joyous ending delivered in A New Hope.

The fight, of course, isn’t over but we understand that these characters, this family brought together on the Colossus will always be there for one another. And that is a beautiful story that I’m actually delighted was told.

The main gripe I continue to have about Star Wars: Resistance is that there is no real peril. Every episode ends predictably because every episode refuses to put the main characters in legitimate danger, a danger that leaves consequences. Well, this week’s episode, Rebuilding the Resistance, was the first episode in the entire season that had a sense of direness and concluded with actual consequence.

Highlighting both the Resistance and the First Order a.k.a Tam and Rucklin, former individuals once living on the Colossus like everyone else, this episode was actually pretty good. END_OF_DOCUMENT_TOKEN_TO_BE_REPLACED

I forgot to write a review for last week’s episode of Star Wars: Resistance because, well, it was boring. Goofy and easily predictable, The Mutiny was somewhat intriguing but overall, I was bored. And then, this week’s two episodes (yes, two) arrived and of course, I decided to watch them.

The first episode, Episode 14: The New World, was actually really, really cool. The Colossus ended up finding a planet they could finally settle down in named Aeos Prime and it was home to a very interesting alien race that was native to the primordial ocean planet.

This was the first episode in a long while that actually made me very happy. The humor was actually funny, the scenarios were riveting, and by the end, I felt like I had seen something worth watching.

Then the second episode of this week’s two-episode header (No Place Safe) devolved right back into the same, tiring formula. The Colossus was in trouble, the First Order was on the brink of apprehending the heroes, and everyone got away just in time. Honestly, how many more times can the same thing happen over and over again before one’s brain feels like mush because it’s just that boring to watch.

Star Wars: Resistance had every chance to be a really fun and creative show but it’s become something that I can’t wait to end. The Clone Wars is arriving next month which will be a breath of fresh air compared to this cartoon. Gosh, it’s tiring.

I thank you for reading and I hope you have a lovely day. May the Force be with you.

If you haven’t noticed by now, I came away from The Rise of Skywalker disappointed. Because of this, I skipped last week’s episode of Star Wars: Resistance. For the last year, I have followed the story in the hopes that it would contain a secret clue to something that might happen in The Rise of Skywalker. Or, maybe a character from Resistance would make a cameo appearance in the Skywalker Saga finale, which would’ve been exciting. When that didn’t happen my obligation to continue watching Star Wars: Resistance faded away but, after my week-long hiatus, I’ve decided to return to the series to see what happened next and for the most part, the past two episodes have been pretty enjoyable.

Featuring a brand new ally of the Resistance named Norath, a pretty cool-looking bounty hunter named Ax Tagrin, and more action with the First Order, both episodes The Missing Agent and Breakout were somewhat enjoyable and a bit direr than what we’ve seen previously, which was a relief.

Star Wars: Resistance is the most childish of the series, meaning there is no real peril. However, the suspense was there and the implications that maybe the series is starting to get a little more series were very apparent.

Where will this story head next? I’m not quite sure but I’m hoping that the series retains this quality over the next few weeks.

I’ll give these two episodes combined a total of 4 out of 5 stars and 89 out of 100. Not perfect but not an atrocious score either.

Am I going to write a post harking about my utter amazement at the tenth episode of Star Wars: Resistance? No. But I can say, this is the best episode in weeks. Titled Kaz’s Curse, it deals with Kazuda Xiono trying to ward off a curse given to him by an angry pirate while the Colossus comes into contact with the Guavian Death Gang in a random asteroid field in the middle of space.

There’s some action, some humor, but overall the plot is tiringly predictable and the episode’s conclusion did nothing to excite me for next week’s episode. With only three episodes left in the entire season (seven less than last season’s number of episodes), it’s very clear that Disney realizes they dropped the ball on Star Wars: Resistance.

Feeling completely separate from the story of the Sequel Trilogy, Star Wars: Resistance is starting to seem more and more like a waste of time. Of course, you must be asking yourself, “If I’m so annoyed with this show then why am I still watching it?”

Well, I’m a true-blue Star Wars fan. Even when something is pretty awful I still am hanging along with the ride to see where the story is trying to head. And with Kylo Ren’s appearance imminent at some point in the upcoming final three episodes, I might as well finish this story.